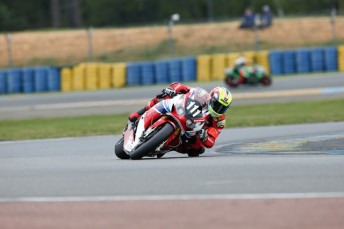 Honda Racing took part in positive free practice and first qualifying sessions in Le Mans ahead of the 24h Motos this weekend.

The result of the combined qualifying times gave Honda Racing an averge lap time of 1:38.044 and the team qualified on provisional third place for the 24h Motos race.

The first rider to get out on track for qualifying was Julien Da Costa who got the second best time in 1:37.594.

Then, he was followed by Sébastien Gimbert who finished in sixth position, with a best lap time in 1:38.706.

Earlier in the day, Julien Da Costa, Freddy Foray, Sébastien Gimbert and Keith Amor managed to finish fourth out of 59 teams in free practice with a best lap time in 1:38.209.

Tonight, these first qualifying sessions will be followed by a night practice session between 21:00 and 22:30 that will allow the team to perfect the Honda CBR1000RR Fireblade SP’s set-up for the race.

The second qualifying session will take place tomorrow from 11:20 to 13:10 and will be followed by a press conference.

The rest of the day will be more relaxed and all racing fans will have the opportunity to meet Honda Racing riders at the pit walk between 18:00 and 20:00, at garage number four.

On the media side, today’s schedule started with a class photograph with all the EWC teams reunited in front of the starting line.

This was the occasion for the riders to share a nice moment of conviviality before the serious things started.

The riders have been allocated a coloured reflective armband in order to be recognised during the 24 hours race.