Honda Racing prepared for battle at the Bol d’Or

Honda Racing prepared for battle at the Bol d’Or 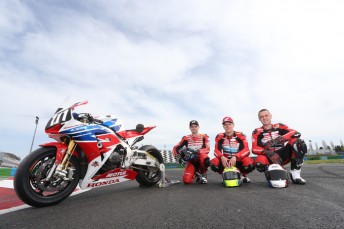 Following an intense two-month schedule of pre-season testing, the Honda Racing Endurance World Championship team is well-prepared to face the opening round of the 2014 season, the Bol d’Or 24-hour, which will take place at Magny Cours, France this weekend.

It will be the first competitive outing aboard the 2014 Honda CBR1000RR Fireblade SP for the all-new line-up of endurance racing experts, Freddy Foray, Julien Da Costa and Sebastien Gimbert, who between them hold seven EWC titles. Australian rider Jason O’Halloran will join the team in Magny Cours as reserve.

All three French riders will undoubtedly be looking to add another championship win to their tally, but for now the focus is on the undeniably demanding task of the first 24-hour battle and securing as many all-important early season points as possible.

The Bol d’Or will see the introduction of a major rule change for 2014. At the eight-hour and 16-hour stages of the race, points (from ten to one) will be awarded to the top ten teams and these will be taken into account in the championship standings. The Bol d’Or begins at 15.00 CEST on Saturday 26 April.

“We’ve completed a very successful testing programme over the winter and the crew and riders are working really well together. We’ve spent a lot of time developing the new Fireblade SP machine, as well as working on fuel and tyre strategies and completing race simulations in preparation for the Bol d’Or. I am very confident in the ability of the crew, the riders and the bike and I feel that we have everything in place to secure at least a podium finish.”

“Since winter testing began, we’ve done about five races worth of riding already so I feel really well prepared for this race. The bike has been great from day one and the feeling has improved day by day. At the end of the Magny Cours test a few weeks ago our lap times were consistent with each other and that is really important. The 24-hour races are always hard and you can never predict what might happen but I think we have a good chance.”

“The pre-season testing has gone so well for us and I was really surprised how quickly I felt at home on the Fireblade. It is a very easy bike to ride and the improvements we have made during the tests have only made it even better. We have a great basic set-up and we’re arriving at the Bol d’Or ready to find the right settings for the conditions. The team works really well together and everyone is determined to do a good job to get a good result in the race.”

“I am feeling really positive after the winter testing and ahead of the Bol d’Or race. The team has worked so hard over the last few months to give us a good bike and the Fireblade is working really well. Our lap times are quick and consistent and that is a very good place to be for the race. After all the testing we have done I’m ready to race now and looking forward to seeing what we can do.”