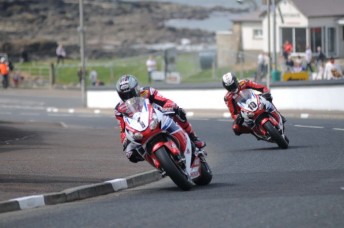 Following the second and final qualifying session for the 2014 North West 200 in Northern Ireland today, Honda Racing’s Conor Cummins and John McGuinness will start Saturday’s Superbike races from seventh and 15th respectively on the grid.

The 45-minute session took place in warm and sunny conditions as the riders headed out on the 8.9-mile circuit in an attempt to improve on yesterday’s times. Cummins was able to climb to seventh on the grid after posting a 4:26.638 lap, 2.5 seconds behind pole sitter Michael Dunlop.

McGuinness – who is celebrating his 20th North West 200 – struggled in today’s session as he continues to recover from a broken scaphoid sustained in training two months ago. The six-time NW200 winner did manage to improve his lap time and will start from 15th position. Just five seconds separate the top 15 riders on the highly-competitive Superbike grid.

Saturday’s race order is below, with roads closing at 10.30am BST. Cummins and McGuinness will complete for Honda Racing in the two Superbike outings:

John McGuinness: “It was pretty tough for me today. This is my first time in anger on the bike since my accident and with back-to-back practice on my 600, Stocker and the Superbike today, it’s taken its toll. I’ll have some physio ahead of tonight’s Supersport and Superstock races and hopefully that will help.”

Conor Cummins: “I’m pretty happy with today to be honest. We made a few changes half way through the session and put a different tyre in the rear, which worked mega, so I managed to go quicker. The guys are busting their chops to get things sorted for me and I’m excited for the race now. I need to get some steady results under my belt ahead of the TT so I’m going to give it some welly!”