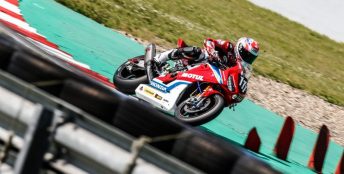 The Honda Endurance Racing team is set up and ready to tackle the penultimate round of the FIM Endurance World Championship, at a new event on the calendar this weekend (22-24 June): the 8 Hours of Slovakia Ring.

Located near the Slovakian capital Bratislava, this event will host a number of different challenges for all teams taking part as they discover the long 5.922km circuit.

Last month Honda’s endurance specialists Freddy Foray, Julien Da Costa and Sébastien Gimbert got a taste of the Slovakia Ring as they enjoyed a one-day test in preparation for the technical new circuit that beckons this weekend.

The last round of the EWC championship saw the Honda squad finish tenth aboard the all-new Fireblade at the Oschersleben 8 Hours in Germany, and with Foray, Da Costa and Gimbert all champing at the bit for a podium finish, the aim for this weekend is clear.

The 8 Hours of Slovakia Ring will begin at 1400 CEST on Saturday 24 June. For more information and updates on the team throughout the race, follow @HondaRacingCBR

Oschersleben was really hard for our mood. We were stronger in the race than during qualifying, but you know, that’s racing! We got to the circuit earlier this week and already we can see that the test we did last month in Slovakia was really helpful as it’s a difficult circuit to learn and quite technical and long. The team has made some updates to the Fireblade, which I feel will be a good starting point for us and we’re all now looking forward to the race.

The result at Oschersleben was a little disappointing but our race pace was pretty good. It’s good to know that we can push and are able to push during the races, so we can aim for something good for Slovakia ring. I’m pleased that we came here to test before the race, as it has given us a chance to learn the circuit and gain some valuable information. We just have to stay focused now and never give up.

After Oschersleben I really feel like we have had no luck. Endurance is a constant development for the bike as it’s a racing experience, so we do have some work to do. The CBR is new, so sometimes it’s not that simple. We all enjoyed our test at the Slovakia Ring with the standard CBR and the circuit is really great, very technical, so it fits my style of riding. I hope this is going to be an advantage for us as there has never been a race here! I would really like to bring a good result to my team before the final round: the 8 hours of Suzuka.

I’m looking forward to what looks to be a very hot 8 Hours of Slovakia race. The circuit is great, it’s very challenging and is new to most of the competing teams, so it should provide some great racing battles. We have made further developments to the SP2 engine and electronics for the race, since Oschersleben, which I’m sure the riders will put to great effect. After our last outing it’s clear to see we have the race pace and we finished in the top ten, so I know that the riders and team are all keen to now progress further towards the front of the field and hopefully secure that podium finish we’ve all been looking for.