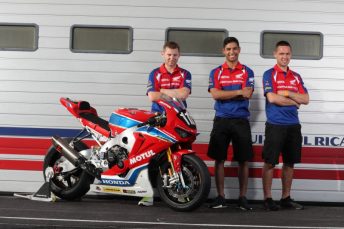 Honda Endurance Racing is ready for the beginning of the FIM Endurance World Championship season, which kicks off with the Bol d’Or (15-17 September). For the prestigious 24-hour endurance race the team will feature a new rider line-up with Gregory LeBlanc and Yonny Hernandez joining Honda veteran Sébastien Gimbert.

The famous Circuit Paul Ricard in the south of France will once again host the Bol d’Or, the opening round of the FIM Endurance World Championship (EWC). With big championship points on offer at the 24-hour race, Honda Endurance Racing will roll out their new rider line-up on the CBR1000RR Fireblade SP2 with the aim of securing the best possible result.

Endurance specialist and Honda stalwart, Sébastien Gimbert will line up aboard the Honda CBR1000RR Fireblade SP2 for the fifth consecutive year and will provide valuable experience to his new team-mates at the Bol d’Or Gregory LeBlanc and Yonny Hernandez.

LeBlanc is no stranger to Endurance racing, the Frenchman is a four-time winner at the Bol d’Or and will be looking to add yet another win to his tally with Honda. Hernandez will bring a fresh approach to the EWC after making the move from Grand Prix racing where he previously enjoyed a five-year stint in the ultra-competitive MotoGP World Championship.

The three riders have enjoyed a successful pre-season test aboard the new Fireblade, where they were able to gain valuable lap time aboard their endurance machine and make various tweaks in preparation for the first round of the 2017/18 season.

This new season will see the famous Le Mans circuit host the 24 Heures Motos in April, before the championship heads to Slovakia and Germany before finishing at the Suzuka 8 hours next July.

Qualifying for the Bol d’Or will take place on Thursday 14 and Friday 15 September, with the race starting at 1500 local time on Saturday 16 September.

Testing has gone very well and all three riders have settled in quite quickly, especially our two new guys Greg and Yonny. They’ve worked very well together in order to help each other out at different parts of the circuit. Based on all the feedback from the riders we’ve really made progress with the setup and by the end of the afternoon all the riders were feeling very comfortable with the bike. They were all within half a second of each other so they’re all pushing the bike to the same limit and everyone left the day smiling! It’s all been very positive and we’ll work a bit further on the setup: particularly suspension, geometry and a little bit of electronics. Overall a great day, all riders are happy with where we and now we aim to find a bit more time before we tackle the Bol d’Or.

After the first day I am happy with the bike and everyone is working very hard. The lap time is not so bad and now we are looking to adjust the bike further. I’m happy because it’s the first time I work with my new team-mates Yonny and Greg, who are both very fast and for the Bol d’or I want us to push together for the best result. For me, I think is possible because we have good lap time on the endurance bike, is easy to work together and so I’m confident.

We have had a very good day testing and it was the first time for me in this team and on this bike. We find a lot of good solutions for the bike and we made good progress lap by lap, so that’s very good and we find a good solution for the race. The setting is very good but of course is necessary that we continue to work as we will ride faster throughout testing, but this setting is a very good basis. For the Bol d’Or, I think is possible to achieve a very good result because the team and the bike is very good, also my team-mates are very fast and it is a pleasure to ride on the Fireblade. For me it’s a new challenge, a new team, because I ride for many years on another bike. It’s very interesting for me to change and ride the Honda, it’s an honour and a pleasure to join this team. I’m very happy because the bike is a very beautiful bike and the team is a very professional team. It’s very interesting to work with an English team as it is the first time for me. It’s also an honour to ride with Yonny and Seb because Seb has a lot of experience and has won many races in Endurance and Yonny, who has been riding MotoGP, is a very fast rider; it’s an honour to ride with these two guys.

It has been a new experience for me because everything is new, so I just focus on finding a good rhythm with the bike and the team. The bike is so different but I’m happy because I have this opportunity to ride in the 24 hours. I think it’s been positive and we work good together, improve step by step and now I want to try some different things to improve the lap times further. I want to do a long run and try to find a good rhythm for the race, a good pace and I look forward to my first race with this team.