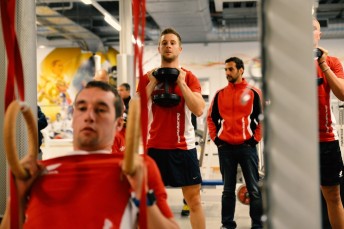 As part of its ongoing commitment to nurture the talent of its athletes both on and off the bike in the Superbike World Championship paddock and alongside Motocross Grands Prix, Honda recently brought riders from all categories and all levels together for a fitness assessment session at the English Institute of Sport.

This is the second time that the EIS has welcomed Honda’s riders for fitness assessments and training routines to complement their individual activities and help ensure they’re at their peak performance and best-placed to continue improving through incremental gains.

On day one of the two-day session, riders from the Pata-sponsored European Junior Cup and the Honda 150 European Championship were present, benefitting not only from the fitness advice and training tips provided, but also from the mentorship of Honda’s professional riders from on- and off-road disciplines.

Aside from strength and conditioning training and general fitness, diet and nutrition also formed a significant part of the programme as crucial factors of human performance.

They were joined by Michael van der Mark and Lorenzo Zanetti from the team’s World Supersport campaign.

From the Racedays Honda squad, Jake Lewis, winner of the 2013 European Junior Cup, who has stepped up to European Superstock 600 competition for this season, trained hard alongside his team-mates, former EJC competitor Kevin Manfredi and Superstock 1000 rider, Kyle Smith.