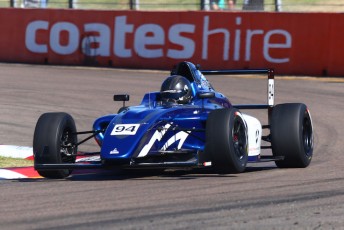 MEDIA RELEASE: Jordan Lloyd will use his hometown advantage to strengthen his hold on the FIA/CAMS Jayco Formula 4 Series.

After an almost perfect inaugural round at the Townsville 400 earlier this month where Lloyd qualified fastest and with two race wins, he stamped his name in the new history books for the first ever round win for a Formula 4 event in Australia.

“I’m really looking forward to this weekend at Queensland Raceway. It’s my home track and I have family and friends coming out to watch, I’ve had success there before in Formula Ford, and it’s a track I know extremely well and the new Formula 4 cars will be well suited to the circuit”, said Lloyd from his home in Toowoomba.

Team BRM and Lloyd are looking to repeat their success from the first round and build on the championship lead that they have and with a home event the likelihood of doing this is increased with the track knowledge.

This will be the first time the new category has been able to really test the cars on a high speed circuit, whilst not the most exciting track Queensland Raceway is technical, so it’s important for both the team and Lloyd to make sure that they get the most out of both Friday practice sessions before qualifying on Saturday morning.

When asked about the preparation for round two Lloyd said: “most of my preparation has been trying to network with local businesses to come on board as sponsors for the year, however its tough out there for everyone and to date we’ve had no luck as yet, but we are working on it!”.

Round two sees 13 drivers lining up to take it to Lloyd and the BRM team.

“Queensland Raceway is great for spectators and sponsors, everywhere is close to the circuit and you can pretty much see the whole track from most vantage points.

“All the drivers will be competing hard which will result in some good close racing, slip streaming down the back straight will be amazing with some late braking into turn three, that’ll be the place to watch”, said Lloyd.

The new open wheeled class first hit the track at 8.05am on Friday for the first 20 minute practice session, watch for F4 number #94 to be top of the charts!