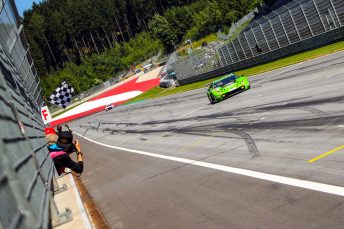 What a fantastic Sunday for the GRT Grasser Racing Team at the ADAC GT Masters at the Red Bull Ring: After Christian Engelhart having claimed a dominant pole position in the morning, he also scored victory in the afternoon race together with his teammate Rolf Ineichen. So, the team was represented at the top step of the podium at its Austrian home race. Not by Engelhart nevertheless – he had to skip the podium ceremony due to his commitments in the Porsche Carrera Cup, where he had to hit the track again very soon after the GT race.

The German dominated the first half of the race in the Lamborghini Huracán number 63. From pole position, he immediately took the lead and extended his advantage setting the fastest laptimes of the field, so when he handed over the car to Rolf Ineichen in the middle of the race, the gap was already about seven seconds. The Swiss then even extended the lead to more than ten seconds with the card behind engaged in hard fights between themselves. But a misfire during the final part of the race put the win at risk again, especially during the last lap everybody in the garage was extremely tense: “We were lucky in the end to have even seen the chequered flag”, Ineichen was relieved after having crossed the finish line with an advantage of 3.6 seconds. “In my stint, the car developed a misfire, that´s why my laptimes where rather inconsistent. The last lap was therefore really difficult, so we decided to stop the car immediately after crossing the line. Thanks to the team – it was a great feeling to be up on the podium here at their home track.”

After the very intense last weeks and months with races about every weekend Engelhart is now looking forward to a short break, until the season will continue in two weeks time at Paul Ricard in the Blancpain GT Endurance Series: „I could not be happier than I am now with this result – now we can really enjoy it for a little bit of time. It has been such a great season for GRT so far, we are leading in the Blancpain GT Series, have won already six races together. I am really proud to be part of it.”

For him and Ineichen war it was the second overall victory in the ADAC GT Masters after Oschersleben 2016, in a race that turned out to be the fastest ever so far in this series with an average speed of 170,9 km/h. Mirko Bortolotti and Ezequiel Perez Companc in car number 19 also finished within the points this time, reaching P8 in the race after the Italian had put the car on P9 in qualifying.

Team principal Gottfried Grasser was over the moon: „A great day, a fantastic weekend. Especially after Saturday, where things did not go so well for us, where we had a few technical problems and did not manage to get any points. But today it all went our way: In qualifying Christian was able to do a real dream lap, that was already ever so nice. In the race the start was the key moment, after that he was able to gain a significant advantage. But then the second part of the race became quite nerve-wrecking for us, as we had to deal with a misfire and loss of power. When the misfire got worse, we were really biting our fingernails as we were not sure whether we would even be able to finish the race. But it was enough and we are ever so happy. I am so proud of our team. Already on Saturday they repaired the car after qualifying in only a few hours and brought it back on track. They really deserve this victory.”