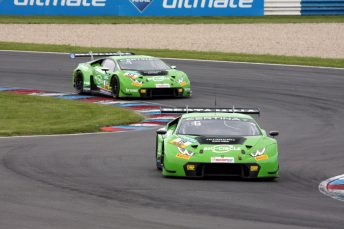 After Mirko Bortolotti´s and Ezequiel Perez Companc´s victory three weeks ago at Lausitzring, GRT Grasser Racing Team goes into its home race of the ADAC GT Masters at the Red Bull Ring at Spielberg full of optimism. “That´s always something very special,“ team principal Gottfried Grasser is adamant. „I am really looking forward to it. After our victory and double podium finish at Lausitzring we will be carrying some extra kilos here, but we will try everything to at least reach the podium again. To do so at home is always especially rewarding!”

Mirko Bortolotti (I) and Ezequiel Perez Companc (AR) in the Lamborghini Huracán number 19 and Rolf Ineichen (D) and Christian Engelhart (CH) in car number 63 will defend the Grasser colours in the ADAC GT Masters as usual. Last year the team achieved a fourth and a sixth place for Ineichen and Engelhart, this time everybody is aiming even higher. But there is some additional opposition to face this weekend: Lucas Auer, nephew of Austrias former Formula 1 star Gerhard Berger and currently racing very successfully in DTM, makes his debut in the ADAC GT Masters at Red Bull Ring in a Mercedes.

„No problem, competition is just raising the game,“ laughs Mirko Bortolotti. The Italian who lives in Vienna already took the wheel for Grasser Racing Teams at the first guest start of the team in the ADAC GT Masters at Spielberg in 2015 – and immediately won. „I have great memories of this track. At Red Bull Ring I did not only score my first victory in the ADAC GT Masters, I also won there in other racing series”, he states. “For me living in Vienna the races there are also always real home races. We have a package that should work there quite well. Also, both the team and I have a lot of experience on this track. But due to the highly competitive field of the ADAC GT Masters the car has to be really perfect to be able to fight at the front. Should the weekend be rather hot tyre degradation will become a very important factor. It will be all about finding a set-up that enables us to still manage to attack towards the end of the race.”

Bortolotti and Perez Companc are coming to Styria as current runner-ups in the Championship and can count on a special amount of support there. “The racetrack is only five minutes away from our factory base. 80 percent of our team members are from the region, partly they can sleep at home in their own bed during the race weekend”, says Gottfried Grasser. “And of course many of them took the chance of inviting friends, family and sponsors. Each day we will have about 150 guests in our hospitality for greeting, entertaining and some wining and dining…” All of them for sure will keep there fingers crossed for the team to be able to continue the series of successes over the last weeks, which lead to GRT not only fighting at the very top in the ADAC GT Masters but also being able to defend their Championship lead in the Blancpain GT Serie recently at Zolder…