Holz shaping up for QDRC defence ahead of Winters shot

Holz shaping up for QDRC defence ahead of Winters shot 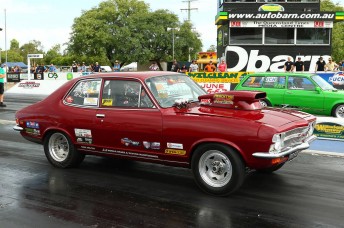 MEDIA RELEASE: Willowbank Raceway – Defending Super Street Queensland Drag Racing Champion Lucas Holz will be looking to continue his dream run from the opening round of the championship this weekend when he gets on-track for round two before returning just weeks later to take-on the FUCHS Winternationals (June 4-7).

This weekend he will be part of a 20-strong field of Prime Signs/Speed Elec Super Street competitors, before the FUCHS Winternationals pits him against 55 opponents – including his wife Angela Holz.

The 34 year old motor mechanic from Salisbury said drag racing has always been a family sport for him and his nearest and dearest.

“It has always been a part of my family, with my dad racing at Surfers Paradise back in the day and then in 2004 my dad, uncle and I bought my Torana and built it over a course of a few years,” said Holz, who drives that 1971 LC Torana Coupe to this day.

Before Holz tackles the FUCHS Winternationals, his attention will be on keeping his championship lead in the QDRC this weekend.

“The QDRC is a highly regarded championship and is tough to win. The Super Street bracket has seen some great new competition come in over the last few rounds and with the championship evolving over the years from elimination to round robin racing things have always been kept interesting,” said Holz, who thanks Maddog Motorsports for their support of his family crew.

“Taking the victory at round one was the best possible start I could have hoped for as I look to defend my title, so this weekend will be all about keeping that points lead and extending it if we can.

“Then it will be on to the Winternationals, which I wouldn’t miss for the world. Ideally I can come away with the win and my wife can be runner-up – that would be a dream come true for me!

“Having said that though, it is fortunate for our relationship that so far we haven’t lined up against each other in a race as yet! So I guess we will just have to wait and see!” laughed Holz, who introduced his now-wife to the sport after they started dating.