Holy Smoke BMW1M back for SMP

Holy Smoke BMW1M back for SMP 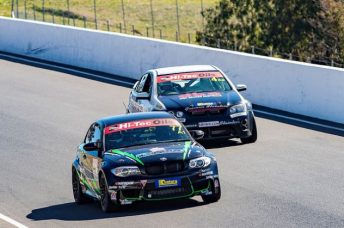 Round one of the APC – part of the Hi-Tec Oils Bathurst 6 Hour – saw the covers come off the Holy Smoke Racing new BMW1M.

After missing out on round two, the entry is now back for Class A1 with Anthony Soole once again at the wheel for the Tyreright Sydney Challenge – round three of the APC to be held at Sydney Motorsport Park across July 7-9.

“Bathurst was the first run of our newly built BMW 1M, and running a freshly built race car at one of the toughest tracks in the world is always going to be ​a challenge, and it didn’t disappoint!” Soole explained.

“Considering we were down on power, we qualified quite well and although we had a few issues during the race, we finished, which a great achievement for our team.

​“We were planning to run the car at the second round for the APC, held at Winton recently, but ​we were unable to source a co-driver for the event.

“For the SMP round I will be driving the car myself for each of the four x one hour races and I am hoping that we will have the car somewhat up to speed! Of course as a new car we still have a lot of testing to do, but we will get some valuable racing miles which should speed that process up a bit.”

With four x one hour races on the docket for the Tyreright Sydney Challenge, Soole will have plenty of chances to push the Holy Smoke Racing BMW1M at SMP next weekend.

“I do like the idea of four x one hour races as it means I can drive each race on my own. It’s like a long sprint race format, which means you get four shots at each race, so if something goes wrong in one race, you have time to come out and have another go at it,” Soole said.

“​Looking at the format line-up for the Series overall, I like the format of the races this year. There is a good mix of events and venues, and I hope to get along to as many as I can.​ It is certainly the plan to make it to each of the remaining rounds for 2017, but that will depend on finding a suitable co-driver for each event – something we are working on!

“While the work with the car continues, we are feeling very positive and are looking forward to getting to SMP next week.

​“We knew this year would be a year of getting used to the new car, and we are still ironing out a few minor issues, but we are getting there. I am very lucky to have COBB Tuning, Atlantic Performance Oils and The Property Investment Store on board this year supporting my racing and hope to give them as many ​opportunities for promotion as I can throughout the rest of our season.”

The Holy Smoke Racing BMW1M and the rest of the APC field will hit Sydney Motorsport Park for the Tyreright Sydney Challenge across July 7-9. Spectator on Friday is FREE and only $15 for Saturday, $25 for Sunday or $30 for a weekend pass. All of Sunday’s action will be streamed online live and free via thenationals.com.au