Höljes next as RX2 heroes rev up for Swedish showdown

Höljes next as RX2 heroes rev up for Swedish showdown 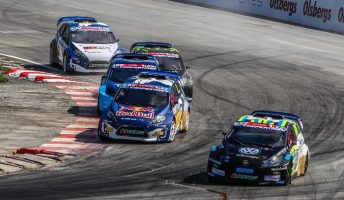 Fans are set to flock to the forests in force next weekend (30 June – 2 July), as the RX2 International Series presented by Cooper Tires races into Höljes in Sweden with a record-breaking 23-strong grid – and a whole host of local specialists eager to shine on home turf.

Following its rebrand, RX2 has delivered a trio of palpitating encounters to-date in 2017, with spectators lapping up the action at Mettet in Norway, Lydden Hill in Great Britain and Hell in Norway. Höljes regularly attracts crowds of up to 40,000 – an astounding statistic when it is considered the local population is a mere 140 – and the future stars of the rallycross scene are primed to put on a show-stopping spectacle.

Defending champion Cyril Raymond has unquestionably been the man to beat thus far, with a clean sweep of victories to his credit – and the Frenchman is aiming to extend that dominant run at Höljes. His rivals, however – all 22 of them, the highest entry ever registered in the FIA World Rallycross Championship feeder series – are similarly determined to stop him, and on paper, many of them have a very good chance of doing so.

Dan Rooke is Raymond’s closest pursuer in the standings, and the Briton has been the model of consistency over the opening three rounds, reaching the rostrum on every occasion. Tanner Whitten is another surefire podium contender, and although the American is learning every track as he goes, he has proven to be a quick learner indeed.

Glenn Haug has been quietly impressive and routinely racking up the results, and the best-placed Norwegian arrives at Höljes sitting fourth in the chase for the crown, just ahead of Simon Olofsson, the leading local hero in the field – and the man who won the event last year.

Belgium’s Guillaume De Ridder is another dark horse who has produced podium-challenging pace on a regular basis in 2017, while Sondre Evjen truly came into his own on home soil in Hell, and is targeting a strong finish after narrowly missing out on the final there.

William Nilsson was one of the star performers in Norway, although a slight over-exuberance cost him in the final and the Swede will be fired-up to bounce back and concretise his evident potential in front of his partisan supporters.

Thomas Holmen was fast but repeatedly out-of-luck in Hell and – although born in Norway – the teenager considers Höljes to be his ‘home’ event. It is unquestionably a home event for brother and sister Andreas and Jessica Bäckman, both of whom are showing encouraging improvement after making the considerable step-up from karting this year. Andreas progressed through to the final for the first time a fortnight ago, leaving him with his tail up returning to Sweden.

“The last round was a genuine breakthrough for me,” the 21-year-old acknowledged. “Reaching the final in a series as tough and competitive as RX2 and up against a lot of drivers with far more experience was a big confidence boost, and now I’ve done it once, I want to do it again and again. From what I’ve heard, Höljes is an awesome event and there will be lots of family and friends coming along to support Jessica and I – so let’s see if we can maintain this upward momentum!”

His sister has yet to scale quite the same heights, but after missing out on the semi-finals by just two points in both Norway and Great Britain, the 19-year-old has a solid goal for her home round – and received praise from none other than former British Touring Car Champion Tim Harvey after taking the racer-turned-commentator for a high-speed passenger ride at Silverstone last month.

“She was mega committed and is clearly a great natural talent,” Harvey proclaimed. “An RX2 car is not an easy piece of kit to drive fast, but Jessica has evidently got the technique dialled in straightaway. Having stepped directly up from karting, she obviously has a big learning curve ahead of her but she has a first-class attitude and approach and is in the perfect place to develop her career. I wish her every success.”

“It’s obviously nice to hear those words from somebody of Tim’s stature and experience in the sport – and good motivation to keep pushing forwards,” enthused Jessica. “I came so close to reaching the semi-finals at both Lydden Hill and Hell, so hopefully it will be third time lucky at Höljes – I’m definitely fired-up to put on a show for the home fans!”

The Höljes RX2 action will begin with practice and the first two qualifying races on Friday, followed by the remaining two qualifiers on Saturday and the semi-finals and televised final on Sunday.