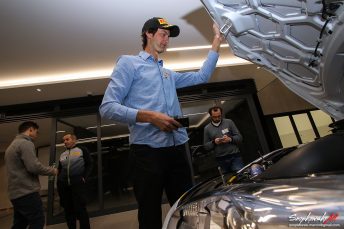 The 28-year-old, originally from Invercargill and now living in Tauranga, recently outlined his plans to take his rallying career international, but needed to await official confirmation that he’d been selected to content the five-round JWRC.

With this confirmation, Holder and his regular co-driver Jason Farmer, from Hamilton, will push on with finding the budget to compete in the one-make championship where all competitors use M-Sport prepared Ford Fiesta R2 EcoBoost rally cars.

“It’s really exciting to get confirmation on our selection into the JWRC,” says Holder, who travelled to the team’s Polish headquarters earlier this month for a ‘meet and greet’ with other prospective JWRC competitors and hop behind the wheel of the R2 Fiesta for the first time.

“There’s been a lot of work and planning already happening in the background so it’s nice to know we’ve been selected. There are still a lot of hurdles to overcome, none more so than the 185,000 Euro budget to compete. I know without a doubt that I will make sure we are on the start line in Sweden, no matter what it takes!

“It’s been an incredible journey in my career until this point and I can’t thank everyone who’s been involved enough. Although this next step is much more challenging than ever, it’s also very, very exciting. I can’t wait to start working alongside M-Sport; the professionalism and knowledge base within the team is unbeatable. It will be a fantastic learning experience.”

The pair will be the first New Zealanders to compete in the entry level World Rally Championship which takes in some of the WRC’s key European events – Sweden in February, Corsica (France) in April, Portugal in May, Finland in July and the unknown roads of Turkey in September.

More information about Holder’s world rallying journey can be found on his Facebook page https://www.facebook.com/holderbrothersracing.