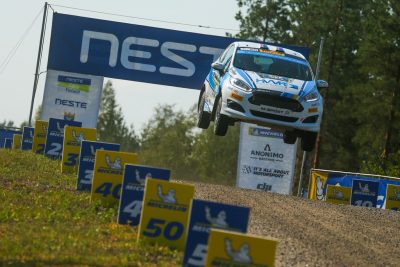 Kiwis Dave Holder and Jason Farmer secured a ninth place class finish in their first-ever run on the famed high speed special stages of Rally Finland. While the pair had hoped for a stronger Finnish result in the FIA Junior World Rally Championship category they are contesting for the first time this year, they have continued their unbroken record of finishing every JWRC event so far.

Mt Maunganui-based Holder notes a number of positives he can take from the 26-29 July running of Rally Finland including consistency of their overall stage times, a generally clean run which enabled them to get to the finish, and learning that they can trust the pace notes that he and Farmer, from Hamilton, write during the pre-event reconnaissance.

Holder says there were also plenty of challenges. “We came here expecting to have a bit more speed as we felt this would be more similar to New Zealand roads. They are similar in many respects, but they also have lots of ruts which I struggled with unfortunately.”

Nearly getting stuck in the ruts at a stage start, learning the necessity of being able to trust your pace notes on the high speed stages, and catching a ‘moment’ before it all went bad were among other issues that the pair worked through during the three-and-a-bit days of the rally dubbed the Finnish Grand Prix.

Speaking of Saturday afternoon’s repeat run through a loop of four stages, Holder said: “We made an error in taking only one spare wheel instead of two on the second pass which turned out to be really rough and have a lot of rocks. The first stage after lunch, we got a puncture which mean we had no spare. We also had another bulging tyre on the back so were having to tread pretty carefully to get through the three remaining stages. Then unfortunately on the very next stage, we got another a puncture and with so many kilometres to go, we couldn’t drive back with that so had to temporarily withdraw from the rally.”

They re-joined under Rally 2 regulations for Sunday’s final four stages and were able to set the third-fastest stage time on the first 11.74km special stage, their best stage result on this rally.

“Overall, not the result really wanted from this event, but we finished on a positive note with a third-fastest stage time in the first stage today, so that’s heading in the right direction,” said Holder. “Two other stages were top six and the last stage, we got a puncture so had to run some mediums, but not such a bad day today.”

Holder credits fellow Kiwi Hayden Paddon who spent some time with Holder and Farmer on Saturday evening to help them with their pace notes. “That made a difference today and I was able to drive, especially that first stage, with confidence that the notes were fine. Moving forward we’ve got to be able to create pace notes on these events that we haven’t seen before – we have to create good notes from scratch.

“So, plenty of things to take away and to learn. We are disappointed not to have completed every stage of the rally, having missed a couple on Saturday, but we got 100% experience in Finland and now we prepare for Turkey to try and get a better result there.”

The next and final JWRC event is Rally Turkey, with the 13-16 September event carrying double points.