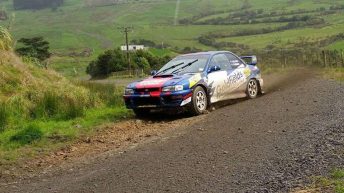 After a two-round deal to campaign the Hyundai i20 AP4+ car at the start of the season, Holder was left on the side lines for the third round, Rally Canterbury in June.

He returns to the series taking the wheel of a 20-year old GC8 Impreza and although Holder acknowledges not having the latest technology will probably lessen his chances of outright victory, he is confident of securing a solid result in one of the strongest fields seen at a national championship round in recent history.

The Mount Maunganui driver also welcomes the continued support of VINZ Vehicle Inspections New Zealand while welcoming on board MRF tyres and Goldfields Automotive Group for the event.

“It’s great to be back behind the wheel, we did a few kilometres over the weekend and that was the first time being in a car since Rally Whangarei in April,” says Holder. “There really are a huge amount of people we have to thank for the opportunity to be back on the stages this weekend.”

“Obviously being in an older car means we may struggle to battle for the top spots, but the car goes pretty well and the car we won the championship in last year was more than ten years old, so Jase and I will certainly be giving it our best shot.”

The Mahindra Goldrush Rally Coromandel sees teams leave the Mercury Bay Sports Park from 7am on Saturday 26 August, with teams taking on 125 kilometres of special stages all over the Coromandel Peninsula before returning to the finish in Whitianga’s Blacksmith Lane from 5pm.