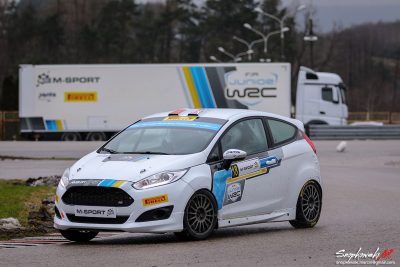 Mount Manganui’s Dave Holder is hoping for snow when he arrives in Poland early next week. Holder and co-driver Jason Farmer, from Hamilton, are heading to Poland to participate in the official pre-season test for the 2018 FIA Junior World Rally Championship.

The pair has confirmed their entry in the five-round JWRC, which gets underway on the snow-covered roads of Rally Sweden on 15 February – hence Holder’s wish for snow during next week’s test.

They’re one of 14 JWRC crews entered for Sweden, all of whom are targeting the entry level championship’s very significant prize package. This year’s JWRC champion will win one of the biggest prizes in world rallying, including a brand-new Ford Fiesta R5 rally car, 200 tyres towards the 2019 WRC2 series, free fuel for seven rounds of 2019 WRC2, free WRC2 registration and free entry to some rallies.

The pre-season test will see Holder and Farmer spend time with JWRC category managers M-Sport, learning about WRC sporting regulations and how the events run, and getting familiar with the Ford Fiesta R2 EcoBoost rally cars supplied by M-Sport specifically for this category.

“During these familiarisation sessions, I expect we’ll have plenty of information to take in,” says Holder, who is originally from Invercargill. “We’re keen to learn more about the car, what we might need to be able to repair on the side of the road and that sort of thing.

“It’s feeling very real now, and I can’t wait to get behind the wheel with Jason alongside for our allocated half-day of testing in the car. We have a closed section of gravel road on which to test – I hope it’s going to be covered in snow to give us the best possible introduction for Rally Sweden!”

During the New Zealand summer, Holder has been hard at work with his physical training and the never-ending effort needed to put together the commercial partnerships and financial support in order to compete in his first international season of rallying at WRC level.

JWRC competitors count points from their best four of the five rounds. Holder and Farmer plan to contest all five rounds to gain as much experience as possible. “Plus, although you hope it won’t happen, there is a chance of a problem or mechanical failure, so dropping a round only puts more pressure on the other events for a good result.”

“We’ve been working hard over the summer holiday period and soon our funding team will be releasing a number of options for rally fans, supporters and sponsors to join us on this incredible journey.”

As part of this process, Holder has re-branded from the ‘Holder Brothers Racing’ banner originally created when the 29-year-old started rallying with older brother James. Now sporting a simple, yet distinctive ‘Dave Holder, Rally Driver’ logo, Holder understands the value of positioning his brand as an athlete and motorsport competitor on the world stage.

The pair will be the first New Zealanders to compete in the JWRC which takes in some of the WRC’s key European events – Sweden in February, Corsica (France) in April, Portugal in May, Finland in July and the unknown roads of Turkey in September.