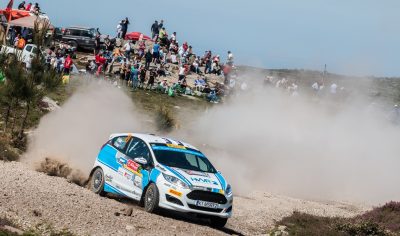 New Zealander Dave Holder and co-driver Jason Farmer believe they have the right frame of mind to tackle the high-speed stages of Rally Finland following recent competition at home.

Holder and Farmer, from Mt Maunganui and Hamilton respectively, head to the famed, forest-lined roads of Rally Finland for the first time this week. They are feeling good about the speeds they were able to achieve at the recent South Canterbury round of the New Zealand Rally Championship as part of their preparation.

The Finnish event, running 26-29 July, is the fourth round of the 2018 FIA Junior World Rally Championship and another opportunity for the pair to show they have what it takes to compete on the world stage.

“I’m really excited to be in Finland,” says Holder. “This is a bucket list event for us with the flow and speed of the stages. As with the earlier events, there’s a lot to take onboard at each round and challenges unique to Finland such as the high speeds, the jumps and the way the roads can rut up as the large field runs through.

“Our domestic competition is playing a vital role in keeping us match-fit, particularly with most of our JWRC competitors also rallying in other European events between JWRC rounds,” says Holder.

“I think the South Canterbury stages really helped get us in the right mindset with average speeds in the two-wheel-drive, left-hand-drive Fiesta not dissimilar to what we’ll achieve in Finland. With South Canterbury’s one pass recce, Jason and I focused on getting as much information into the notes as we could. Competing on the stages with those notes showed we can have more confidence in our notes than we’d previously thought, so that was a really good step forward for us.”

Holder also raced on the gravel stages of the Nelson Rally recently, running as the event’s zero (safety) car in the Stadium Finance Fiesta. “I appreciate every opportunity for seat time, particularly in a similar car to the Ford Fiesta R2 EcoBoost we run in the JWRC. Being a blind rally, it was also a good chance to put a novice in the co-driver’s seat to help them gain some experience. It was great to have Katrina Renshaw alongside, especially as she’s recently been accepted for Rally New Zealand’s codrivers’ academy.”

Being the first New Zealanders to contest the World Rally Championship’s junior category has been a huge ask for Holder and Farmer. Holder confirms finding the budget to compete in the M-Sport prepared Fiesta is his biggest challenge. “We’re extremely grateful for our many supporters, especially HWR Group. We have a new initiative underway with HWR where the profits of any new client business we can bring to three HWR companies – Allied Concrete, Allied Lubricants and Allied Petroleum – this year will go to support our JWRC campaign.”

Currently Holder is ninth on the JWRC drivers’ championship points-table. With 25 points up for grabs for the winner in Finland and double points for the final JWRC round in Turkey in September, he says it’s mathematically possible for nearly any of the 14 JWRC entrants to win the championship title. A 15th competitor joins the JWRC field with the confirmed entry of a young Finnish star.

Rally Finland is based in Jyväskylä and comprises 317.26 competitive kilometres broken into 23 special stages and connected by around 1,110km of touring stages. It gets underway on Thursday event with the mixed-surface Harju street stage attracting big crowds in central Jyväskylä. Friday’s itinerary takes crews west for around 126km of action on 10 stages, four of which are repeated, and the last stage, another run through Harju, starts at 8pm in the Finnish twilight. Saturday’s right stages deliver almost 143km of relentless action spanning nearly 16 hours on roads south-west of the rally base before Sunday’s finale heads east for two runs at two classic tests – Laukaa and the big jumps of Ruuhimäki.