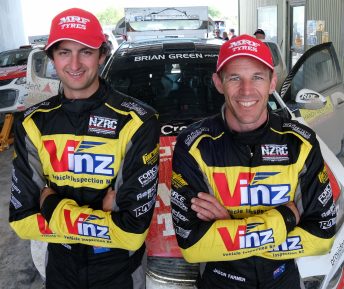 Tauranga-based Holder, age 28 and originally from Invercargill, will have regular co-driver Jason Farmer, from Hamilton, alongside him if he’s selected as a competitor in the five-round JWRC which is run by M-Sport Poland.

“Right from the outset, I’ve made no secret about rallying being more than a hobby for me. We had thought about entering the Asia-Pacific Rally Championship, but this year’s fact-finding trip to the Spanish World Rally Championship event and other parts of Europe confirmed that this is where I need to be to continue learning and developing as a driver,” says Holder who counts Kiwi rally star Hayden Paddon among his mentors, with Paddon helping with connections and information while Holder was in Europe.

For Farmer the opportunity is an exciting unknown. “Competing in the JWRC is definitely going to be a challenge for Dave and myself,” says the 37-year-old who has co-driven for Holder since 2015. “We will be on the other side of the world in completely unfamiliar surroundings and on road surfaces we have never competed on before. But this just adds to the adventure. Dave and I have a strong relationship both in and out of the car and I am looking forward to taking on next season’s challenges alongside such a motivated and hard-working guy. We’re both grateful for the support of our families who have also embraced the adventure ahead of us next year.”

The JWRC follows the ‘arrive and drive’ formula established by the WRC Academy in 2011 with competitors driving the Ford Fiesta R2 EcoBoost rally cars built and maintained by M-Sport Poland under the guidance of team director Maciej Woda.

Holder has already registered for the championship, but must await the first selection of confirmed competitors being made on 15 December to be 100 per cent sure of his entry. Meanwhile, he’s hard at work trying to raise the necessary €185,000 budget.

Getting behind the wheel of a two-wheel-drive car again after two seasons in four-wheel-drive doesn’t faze Holder. “Strangely I’m really looking forward to being back in a 2WD, although I’ll find out quickly if any bad habits have developed after driving 4WDs. The low power combined with two less driving wheels means you really have to maximise corner speed all the time to be fast, so without a doubt the experience will make me a better driver in the long term.”

The five-round championship takes in some of the WRC’s key European events – Sweden in February, Corsica (France) in April, Portugal in May, Finland in July and the unknown roads of Turkey in September. Competitors count points from the best four of the five rounds. “We’re planning to do all five rounds. We need to get as much experience as we can on every possible WRC event, plus there’s always the chance of mechanical failure, so dropping a round only puts more pressure on the other events for a good result.”

Holder has his eye firmly on the very significant prize package on offer for the 2018 JWRC champion, which includes a brand-new Ford Fiesta R5 rally car, 200 tyres towards the 2019 WRC2 series, free fuel for seven rounds of 2019 WRC2, free WRC2 registration and free entry to some rallies.

“There’s no doubt the prize package on offer is fantastic, I mean who doesn’t want to win an R5 car?,” Holder says. “However, we need to be realistic about our first year over there. We’ll be up against young guys who not only already have a lot of experience on the events but are the brightest talents from around the world. Jason and I plan to take the first two rallies – Sweden and Corsica with their respective and unfamiliar snow and tarmac surfaces – steady and ensure we finish every kilometre to get the most from the experience. After that we’ll have some knowledge of the car/team, so will target podium finishes for the second half of the season.”

This week Holder took a swift trip to the team’s base in Krakow, Poland to participate in an official ‘meet and greet’ with other prospective JWRC competitors. He also had the chance to meet some of the key M-Sport personnel and to get to grips with the one-litre Ecoboost Ford Fiesta R2, with tuition from former FIA WRC Academy Champion and 2017 Wales Rally GB winner Elfyn Evans.

Holder says he was made to feel very welcome at M-Sport Poland. “It’s nice to already feel part of the team here at M-sport. It looks like we will have a great team around us next year, which will let me and Jase focus on our job in the car.

“The facilities in Poland in incredible; everything is immaculate with each and every space/feature in the building designed for a specific purpose. The level of professionalism certainly jumps up a few notches when you see what goes on behind doors in a factory team.

“This visit has been a valuable opportunity to meet some of the other perspective drivers, some of who have already competed in the JWRC. Hearing some of their experiences is all valuable knowledge as we prepare for next year’s events.”

Holder’s run in the R2 Fiesta was essentially his first time on tarmac as well as his first time driving a left-hand-drive car. “It was extremely slippery so not really that representational, but great to get a feeling for the car. Elfyn was great with feedback, and really encouraging considering the slow speeds we were achieving. Regardless of the competitiveness, I approached it as a chance to gain some knowledge around the characteristics of the car. I also enjoyed the chance to get to know more of the team, as I’ll be working with them throughout next year more closely.”

With two months until the first event in Sweden, Holder and Farmer have both the funding and travel logistics to work on alongside their fitness regimes, which includes Farmer’s recovery from recent ankle surgery. They’re getting plenty of support, particularly from Paddon.

“Hayden’s been pivotal in a number of my career decisions, and always has wisdom and advice to offer in any rally situation. Now more than ever, his guidance will be key as we prepare for events that are new to us. Ultimately he’s been a big believer in me during the good times and the bad, so I’d love to reward his faith and perseverance with me by making it on the world stage.”

Paddon is delighted to see Holder pursue his dream of an international career. “It’s great to see Dave show it is possible for Kiwis to compete on the world stage. He has showed at the New Zealand level that he has the talent, and the next step from there is the support categories of the WRC. We all know the biggest hurdles are the financial barriers, but Dave is committed and working hard towards his dream. That passion and drive will take him a long way. Next year will be about gaining experience for him on what will be all new events, but I believe he can also deliver good results.”

Holder’s wife Adina may join them in Europe, as he’ll need a logistics and social media person on the ground. “Regardless of whether Adina is that person, there’s no questioning her support for the campaign, for which I’m very grateful. In her words, she’s ‘never felt more sure about a rally decision’.

“I’m also grateful for the support of Vehicle Inspection New Zealand (VINZ) and their CEO Gordon Shaw for the past two seasons. Now we’re working to build a family of supporters keen to help get the next New Zealander to the World Rally Championship,” Holder says.

More information about Holder’s world rallying journey can be found on his Facebook page https://www.facebook.com/holderbrothersracing.