Hobart team hopeful of victory in national event at Baskerville

Hobart team hopeful of victory in national event at Baskerville 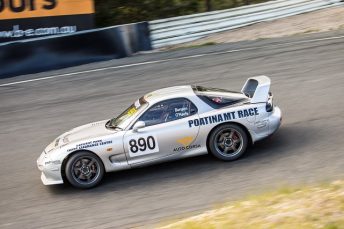 18 teams from around the state will compete on Saturday 3 June at Hobart’s historic Baskerville Raceway, representing Tasmanian motor sport car clubs in round four of the inaugural national CAMS Club Challenge.

One group hopeful of victory is the five-driver squad backed by Stuart Benson Petrusma Property, who are representing the Hobart Sporting Car Club.

Driver and team manager, Stuart Benson, says he feels confident with preparations made so far for this first of its type event.

“The team constructed boasts experience and ability, with local motorsport identities including Tony Warren, Peter O’Keefe, Damien Moore, David Paine, and I too am looking forward to getting behind the wheel again.

“With combined wins at Targa Tasmania, as well as various championships in circuit racing, hill climbing and rallying, we feel very confident approaching this style of event”.

Benson says the aim of the competition is for every car in the team to produce the closest possible elapsed time to the current track record in each class. Multiple attempts will be conducted during the day and the team with the least amount of penalties accrued will be crowned the victor. Cash prizes will be awarded to the clubs of the three top performing teams.

The Hobart-based group have a high horsepower fleet to help them achieve their goal, including a turbocharged four-wheel drive Mitsubishi Evolution, lightweight rotary powered Mazda RX-7, thumping V8 Holden Commodore, and even a Mk II Ford Escort RS that has been integrated with V8 Supercar technology.

Competition gets underway at 9:30am and entry is free for spectators.