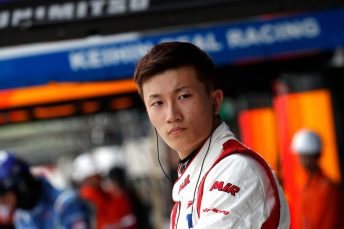 MEDIA RELEASE: Honda-supported racing driver Tadasuke Makino has today, February 13th, been confirmed as Hitech GP’s fourth and final driver signing for the 2017 FIA Formula 3 European Championship – which will be the Japanese teenager’s maiden season of action outside the Far East.

Expanding to four cars for its second full year in the world’s premier F3 category, Hitech GP is thrilled to have secured Makino’s signature having been impressed by the 19-year-old’s pace and feedback during winter testing.
Makino, from Osaka in Japan, arrives in the FIA F3 European Championship with a strong reputation already in place after a terrific debut season in the prestigious All-Japan F3 Championship where he took four podium finishes on his way to fifth in the driver standings.

Additionally, Makino gained extra experience in the renowned Super GT Championship where he contested three races at the wheel of a Honda NSX Concept-GT car in the premier GT500 class and secured one podium. During his first season of car racing in 2015, he claimed six victories en-route to the Vice-Champion position in Japanese Formula 4.

“I am very excited to race with Hitech GP for the 2017 season, actually my first season competing in Europe”, said Makino, “I can’t wait for the first round at Silverstone, it is the team’s home circuit just a minute from our workshop and I’m really looking forward to racing at such a great track. All of the circuits will be new to me, but I know I have a great team to work with and very good team-mates.

“Of course, I must say a big thank you to all of my sponsors and supporters, especially Honda, they have given me a great opportunity to be with Hitech GP and made this deal possible. Hopefully it will be a strong first season for me in the FIA Formula 3 European Championship.”

For his maiden campaign on European soil, Makino will form part of one of the most exciting entries in FIA F3 as team-mate to Estonian racer Ralf Aron, British driver Jake Hughes and Russian pilot Nikita Mazepin.

On behalf of Hitech GP, team principal Oliver Oakes said: “We are really excited Tadasuke has joined us, he tested for a few F3 teams over the winter and caught our eye – especially considering it was his first time on the European scene. He has showed his talent jumping between F3 and Super GT in Japan, so we are thrilled he has decided to join us in the FIA Formula 3 European Championship.

“He is a quick learner and we’re expecting Tadasuke to raise a few eyebrows next season, from what we have seen so far. It’s fantastic to expand to four cars for our second year in FIA F3, we’re very pleased indeed with our driver line-up for 2017.”

Silverstone Grand Prix Circuit in the UK will host the opening three races of the 2017 FIA Formula 3 European Championship over the weekend 15th/16th April. The season will reach its conclusion on 14th/15th October at Hockenheim in Germany.