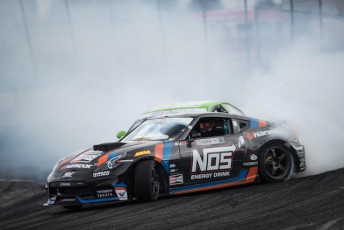 Dry track conditions and varied temperatures led to a high-speed event in front of a sold out crowd at Evergreen Speedway, about 30 miles outside of Seattle. Forsberg, racing in his signature Hankook Tyre Nissan 370Z, battled his way to a third consecutive finals showdown after beating out Matt Coffman in the semi-finals. The two-time champion is feeling very confident following his consistent run over the last few months.

“We are feeling fantastic heading into the final leg of the season with the Formula Drift championship lead after five podiums in a row,” said Forsberg. “I want to thank Hankook Tyre for giving me the consistency that I need to put me on the podium again and giving me the edge to take the championship lead. We have had great finishes at Seattle in the past, but with the changing track conditions and limited sunlight, my Hankook R-S3’s gave me the maximum grip I needed to secure a podium finish.”

With just two more events to go for the year, Forsberg looks to continue his success and secure first place, while helping Hankook Tyre ascend to the top of the Tyre Manufacturer championship standings.

“I’m extremely excited about Chris’ second place podium finish as it’s exactly what we needed to continue our momentum into the final two rounds with the championship points lead,” said Donato Bonacquisto, Hankook Tyre Motorsports and Events Manager. “The Hankook Ventus R-S3’s continue delivering the consistency that Chris required to help him obtain the championship points lead with five consecutive podium finishes. We look forward to Formula Drift Round 7 and continuing to close in on the Tyre Manufacturer championship.”

Formula Drift heads to Texas Motor Speedway in Fort Worth, Texas on Sept. 9 for Formula Drift Round 7: Showdown.