Historic 1972 BRM Formula One car to race in New Zealand

Historic 1972 BRM Formula One car to race in New Zealand 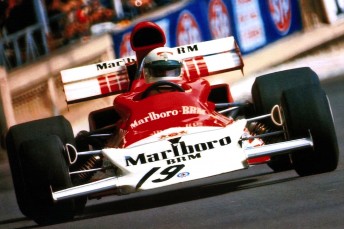 Kiwi F1 driver of the 1970s, Howden Ganley drove a BRM P180 3.0 litre V12 F1 racing car in the 1972 Monaco Grand Prix. That car is now owned by Englishman Robs Lamplough. He is a collector and driver of historic cars and historic aircraft and his collection includes WW2 fighter planes like a Spitfire and a Mustang.

Robs drove his BRM P180 in a race for Historic Grand Prix cars at the F1 Singapore Grand Prix meeting held on 17th September 2014. With a little encouragement from Howden, Robs agreed to bring the BRM to New Zealand for the Gulf Oil Howden Ganley F5000 Festival to be held at Hampton Downs 16th-18th and 23rd-25th January 2015 (see www.nzfmr.co.nz).

The BRM P180 was developed by its designer, Tony Southgate, to replace the BRM P160 cars. The P180 was lower than the P160 and, amongst other changes, the P180 had a streamlined cockpit fairing that allowed just enough space for the driver to fit into.

The rear view mirrors were included inside the fairing and the car was distinctive in having a small slot in the fairing for the steering wheel to protrude and to allow the driver’s hands some space for movement when turning a corner.

Unfortunately, the P180 was not as fast as the P160 in a straight line. Howden did a lot of testing in the P180. As well as driving this very car, now owned by Robs Lamplough, in the Monaco GP in May 1972, Howden also drove it in practice for the ‘Rothmans 50,000’ race at Brands Hatch in August 1972, and in practice for the Canadian GP in September 1972.

Rob’s BRM will join two other BRMs at the Gulf Oil Howden Ganley F5000 Festival. Peter Burson of Papakura owns a 1974 BRM P201 and a 1976 Stanley-BRM P207 and both of these cars will be seen at the Festival.

Come and see this unique BRM racing car art the Gulf Oil Howden Ganley F5000 Festival. Early Bird tickets for the Festival are available until the end of October 2014 – go to www.nzfmr.co.nz.