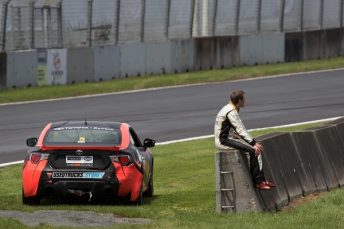 Some blistering speed from Cameron Hill in today’s final New Zealand Toyota 86 Racing Championship race at Pukekohe’s ITM 400 has gone unrewarded after he was punted out of a podium position.

Starting fourth on the grid, Hill applied the pressure to the race leaders, working his way up to third position on lap three and setting one of the fastest laps of the race.

At the start of the fourth lap, Hill’s Speed Works/Southern Star Truck Centre/National Capital Toyota/Anytime Fitness was tapped into a spin by Bramwell King entering the back straight, rotating backwards into the wall, and the damage was too severe for Hill to be able to continue.

“It was disappointing for the weekend to end like that, because I was feeling comfortable in the car and everything was starting to come together,” Hill said.

“I had overtaken King the lap prior, and then he just hit the back of my car and spun me into the fence. It pushed the guard back onto the tyre and I decided it was safer to retire than risk further damage.

“I watched the rest of the race from the infield and it was a really entertaining race, so it was a shame I wasn’t out there amongst it.”

While Hill may not have ended up with a result worthy of his speed, he was still pleased to have participated in the event.

“We tuned the car all weekend and by the end, we showed we could run right at the front.

“Big thanks to Geoff Short and the NZ Toyota 86 crew for the opportunity.”

Hill is now looking forward to the final round of the Australian Toyota 86 Series at the Newcastle 500 in three weeks.

“I’m excited to be back in my own car, racing on a brand-new street circuit, and hopefully finishing the 2017 season on a high note,” Hill concluded.