Hill: ‘We’ve ticked all the boxes’

Hill: ‘We’ve ticked all the boxes’ 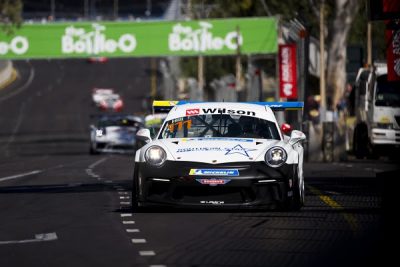 Cameron Hill says he and his small family team have achieved all their objectives in their debut Porsche Wilson Security Carrera Cup weekend, after a ninth-place finish in today’s third race secured a top 10 position for the Canberra racer in the series standings.

Starting eighth on the grid in the Southern Star Truck Centre/Anytime Fitness Porsche 911, Hill was overtaken by Nick McBride and Adam Garwood after a mid-race Safety Car, but recaptured a position from Garwood on the final lap.

“We didn’t quite nail the setup for today’s race, I think the tyre pressures were a bit low,” Hill said.

“If the race had run green all the way through, the car probably would have come on more strongly towards the end, but the Safety Car really hurt.

“Overall, I’m happy with the weekend. It was always going to be an uphill battle, racing on such an unforgiving circuit in a car I’m still learning, so to finish in the top 10 and to be able to put the car into the truck without a scratch is a great outcome.”

The next round of Carrera Cup is at the Australian Grand Prix in three weeks, and Hill said the Albert Park circuit will be a more comfortable place to test the car’s limits.

“Albert Park is a much wider circuit, and being a Formula 1 circuit the runoff areas are more generous, so it’s a circuit where I’ll be able to push harder and understand where the limits are, without such a high risk of damage.

“I’m very proud of the effort from my team this weekend; against some of the better-resourced outfits we’re definitely punching above our weight, but there’s still a lot of work to do to move closer to the front of the field,” Hill concluded.