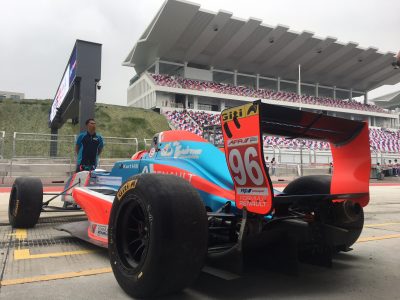 Young Australian racer Kurt Hill endured a difficult weekend in round three of the Asian Formula Renault series, but is still taking a lot of positives forwards into his championship battle.

“Overall, the race weekend, from what I could control, went really well. I did everything that I could. Right from practice, all the way through qualifying, my pace was amongst the fastest. In qualifying we made the choice to use only one set of fresh tyres rather than two. This gave us a slight disadvantage for our qualifying position, but it meant we had an advantage if the race was dry.  Unfortunately, in race one we had a fuel pressure issue, meaning the car just stopped. Then in race two we had another electrical problem, with the pitlane speed limiter being stuck on, so I could not finish that one either. That’s the first time, ever I think, that I’ve had a race weekend where I took no points, but I still take away from what I achieved, and we will go forwards to have another strong weekend next time,” explained the 21-year-old.

The former speed-skater showed strong pace in the #96 Eurasia car straight out of the box, stating that, despite some issues with yellow flags, his qualifying lap was still the stand-out moment of his weekend. “In the first part of qualifying we did really well. The pace from practice continued on to our qualifying, and I was the most relaxed that I’ve ever felt in the car. I ended up half a second off, but I lost about three or four tenths through some yellow flags that were on my lap, so it was definitely a stand-out moment.”

Starting further down the grid than expected in his #96 Eurasia entry, Hill didn’t let his eighth-place start affect his mindset to the race, continuing to focus on getting the maximum from himself and the car in every session.

“My approach doesn’t really change whether I qualify eighth or first. Of course, how much you can extract from the car can sometimes change depending on your grid position, but with the way this weekend went and the way the conditions were, anything was to play for from almost any grid position on the track.”

The remote and challenging 4.015km/2.494mi, 23 turn Ningbo circuit was new to everyone in the AFR series. Despite his difficult weekend, Hill stated afterwards that overall, he’d found it a lot of fun to drive.

“There were a lot of cool sections on the Ningbo track, but coming down the hill, turn 16, 17, 18, was the most fun. You come down into three blind turns basically, and you’ve really got to trust yourself and trust the vehicle that it’s going to be in the right place, providing that you do everything correctly. I really enjoy this kind of challenge.”

Speaking about his Eurasia team, Hill was especially grateful for the effort everyone had put into getting the best from the car at a new circuit. “Everyone at Eurasia Motorsport did a great job this weekend, everyone worked very hard. There were lots of car set-up changes for this track, collecting as much data as we possibly could. It was great for the engineer to be able to understand this fairly quickly and give us what I thought was a really good set-up going into qualifying to get the best from the car.”

Heading forwards to round four of the series in Zhuhai, the young Sydney racer is taking plenty of positive lessons away from Ningbo, in spite of his negative points haul.

“The big thing that I’m taking forward with me is my ability to extract the pace from the car and the tyres, regardless of how it is set up or what the conditions are. So that’s a good thing to be able to take forwards with me. It’s the first weekend that I’ve really felt that, no matter what the conditions, I’ve got the absolute maximum out of everything. I will take this with me for the rest of the season and for the rest of the championship battle, as this is what I’m going to need to try and claw my way back into it after the unfortunate weekend we’ve had.”

Round four of the Asian Formula Renault Series takes place at Zhuhai International on June 8-10.