Hill remains motivated in the face of adversity

Hill remains motivated in the face of adversity 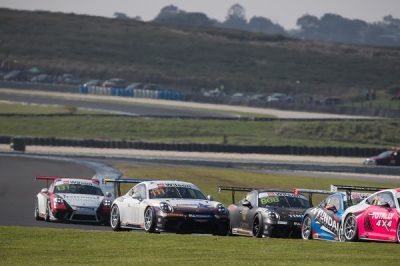 Another challenging weekend in Porsche Wilson Security Carrera Cup has not reduced the motivation of Canberra racing driver Cameron Hill to succeed at the top level of motorsport.

After spinning his Southern Star Truck Centre/Anytime Fitness Porsche out of ninth position in Race 1 and finishing 25th, Hill was on a determined fightback in this afternoon’s second race, making up 11 places in the opening four laps before a Safety Car was deployed due to an on-track incident

At the restart, Hill set about making up more positions but was caught out by several rapidly-slowing cars at Turn 4. Attempting to take evasive action, Hill locked the rear brakes and skewed sideways, clipping another car and sustaining rear wing damage.

While he initially remained on the circuit for a couple of laps, Hill’s team made the decision to retire the car in the interests of safety.

“We decided the risk of staying on the track, potentially sustaining a total wing failure and having a high-speed crash was too great, so we parked for the remainder of the race,” Hill said.

The last two Carrera Cup rounds may have been a couple of the toughest in Hill’s motorsport career, but he remaining positive as well as philosophical.

“Like any sport, motor-racing is not going to be smooth sailing all the time – there are going to be some rocky stages along the way, and we’re going through one of those at the moment,” Hill said.

“I’m not depressed or disheartened because at the end of the day, I’m very lucky to be racing at the top level.

“This year, throwing ourselves in the deep end and having to figure out everything from scratch, there were always going to be challenges and mistakes – the important thing is we’re learning from them.

“The other categories we’ve raced in, Formula Ford and Toyota 86 Series, have been the same – we started out with my team having to learn the car, and me having to work out the best driving technique. It was hard work at the start but then we started winning, and it was very satisfying.

“Our pace in the Porsche has not been too bad at all, and now it’s just a case of ironing out some of the rough edges in my driving, which will come with more time in the car. We have a good break before the next round at Hidden Valley, and we’ll be utilising the time to complete some more testing,” Hill concluded.