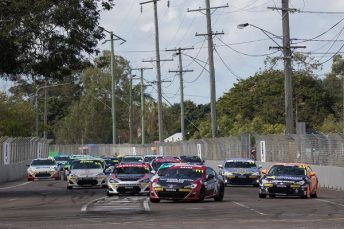 Cameron Hill is prepared for a stiff challenge from his rivals when he returns to the track for Round 3 of the Australian Toyota 86 Racing Series at the Red Rooster Sydney SuperSprint this weekend.

The 20-year-old Canberra driver dominated the last round of the series at Townsville in his Southern Star Truck Centre/National Capital Toyota/Anytime Fitness 86, qualifying on pole position and notching up comprehensive victories in both completed races, but he is expecting his rivals to lift their game.

“Sydney Motorsport Park is our home track but a lot of the other 86 Series drivers test there as well.

“At Townsville, no-one had raced an 86 there before and we were able to learn the track very effectively, but we won’t have that advantage at SMP.

“It’s also a very different sort of track – at Townsville, you had to attack the kerbs but SMP is a track with a long straight and flowing corners, so it will be important to be smooth and precise.

“In between rounds, I’ve been working hard on my fitness and we’re also running Lachlan Mineef in the NSW Formula Ford Championship, driving my old car.

“Working with Lachlan has been great – as well as being satisfying to help develop a young driver, it has also helped me think about how I analyse data off the track, which is helpful for my own racing.”