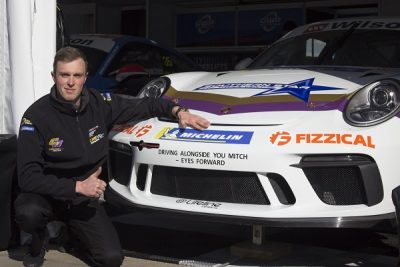 Cameron Hill’s 2018 racing season has had its ups and downs, but the Canberra racer says even his most difficult days pale into insignificance compared to the journey about to be undertaken by one of his family members and biggest fans.

In devastating news for the extended family, Hill’s 14-year-old cousin Mitch was recently diagnosed with osteosarcoma, a rare form of bone cancer.

Starting with this weekend’s Carrera Cup round at Sydney Motorsport Park, Hill’s Carrera Cup car will be adorned by a message: “Driving alongside you Mitch – eyes forward” – symbolising the journey Hill will be taking with Mitch.

“Mitch has been very close to my racing for a long time, he has loved being part of the team and sharing my experiences,” Hill said.

“When something like this happens, it really does put everything into perspective – I’ve had some tough days on the racetrack this year, but they are nothing compared to the process Mitch is about to go through.

“He was supposed to be at SMP this weekend to watch my Porsche races, but unfortunately he has just started chemotherapy and won’t be able to make it.

“We’ve displayed a special message on the front of the car, to give Mitch some encouragement and something to smile about while he is undergoing cancer treatment.”

Hill said Mitch and his family have been supported by some very generous organisations.

“The Ronald McDonald House is keeping Mitch’s immediate family close to him while he undergoes treatment at Westmead Children’s Hospital, and his family has also acknowledged the Australian Cancer Research Foundation, which aims to raise money for scientists to conduct cancer research,” he said.

Hill will be on track for Carrera Cup Round 5 practice and qualifying tomorrow.