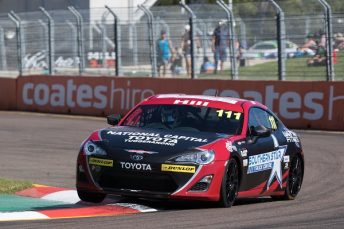 Cameron Hill has concluded his domination of Round 2 of the Toyota 86 Racing Series with another race victory at the Watpac Townsville 400 today.

Hill led early in Race 5 of the series this morning, but a multi-car pileup unfolded behind the Canberra driver, necessitating a stoppage and lengthy recovery process – it was ultimately declared a non-event.

Starting on pole for Race 6, Hill again drove away from the field in his Southern Star Truck Centre/National Capital Toyota/Anytime Fitness Toyota 86 before his advantage was slashed due to a Safety Car.

At the restart, Hill asserted his authority on the race, setting the fastest lap as he pulled away from his rivals and charged to another first-place finish.

The Canberra driver’s perfect weekend in Townsville netted him enough points to leapfrog him from 13th to second in the series standings.

“Overall, it was a brilliant weekend, and a great way to bounce back and launch ourselves back into contention after our unlucky run at Phillip Island,” Hill said.

“The car was faultless all weekend and every session went according to plan.

“I really enjoyed the circuit – for a street circuit, it had a good mixture of high-speed corners and technical sections.

“It’s a shame Race 5 was stopped as I was starting to build a lead, but we made up for it in Race 6.

“For the next round, we head to Sydney Motorsport Park, a track where I’ve done plenty of laps – bring it on!