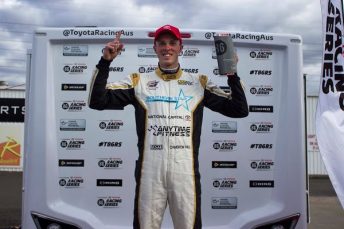 Hill led every lap in both races, also setting the fastest lap in Race 9.

Hill has now won five races in a row, and 10 in total in the Toyota 86 Racing Series – more than any other driver.

The perfect weekend has also seen Hill close the gap to series leader Jimmy Vernon – the margin is 90 points with six races remaining in the season.

“In Race 8, Aaron Seton was really strong at the start and kept the pressure on me for the first half of the race.

“As my tyres came up to temperature, I was gradually able to pull away from him but the lap times were very close.

“Race 9 was a similar story, except Jimmy Vernon beat Aaron off the line. Once again, my car became stronger towards the end of the race relative to Jimmy’s car and I was able to build a margin.

“Overall, it was another sensational weekend and very satisfying to keep the winning streak going. I can’t wait to head to the most famous race track in the country, Mount Panorama Bathurst, for the next round in October!”