Hill to Bring Youth and Experience to Student Team

Hill to Bring Youth and Experience to Student Team 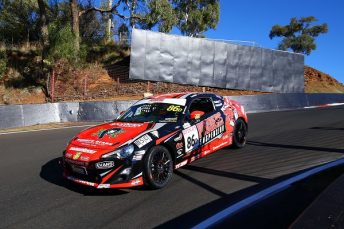 The students of Motorsports Training Australia (Wodonga TAFE) have been the stars of the past two seasons for Pedders Racing, forming the crew and learning the demands and challenges of national motorsport competition.

Next weekend, the #86 garage will welcome another star to its ranks as Cameron Hill takes to the co-driver’s seat for Round 2 of the Australian Production Cars Series, bringing both youth and experience from his own Toyota 86 Racing Series campaign.

Having begun in go-karts, Hill won the Australian Pro Junior Championship in 2012, before moving into the Australian Formula Ford Series for 2014, finishing sixth in his debut season with several podium finishes. In 2015, he became the first privateer to win the Championship in over a decade – his 12 race wins making him the seventh most successful Formula Ford driver of all time.

While Hill was taking honours, Pedders Racing were also making their place in the record books, debuting the world’s first production racing 86 in a national championship in 2013, going on to secure three further world firsts and securing 2013 and 2015 Class Championships in the then-Australian Manufacturers Championship, the second title with great credit to their student crew from Motorsports Training Australia and the staff who train them.

Next weekend, Winton Motor Raceway will host the second round of the Australian Production Cars Series’ endurance calendar. With Hill having won the last three rounds he has competed in at the Winton circuit (Formula Ford 2015, Toyota 86 Series 2016, Legend Cars 2016), and (Grant) Phillips having completed countless laps of his home track in no less than four of his own race cars and as a Supercars Course Car driver for over a decade, there are high hopes that the mix of youth, experience, grit and familiarity may be the ticket to further success for Hill and the Pedders Racing outfit as the young racer explained:

“I’m looking forward to returning to Winton in a Toyota 86. It’s a track that has very fond memories for me, and I thank the team at Pedders Racing for the opportunity.

“The Toyota 86 Series consists of sprint races, and one of the goals this year was to do some longer endurance events. I thoroughly enjoyed racing in the Bathurst 6 Hour, and the longer distance race at Winton will be a good challenge in a strong field of production cars.

“Joining Pedders Racing is also a great chance for me to get involved with some of the up-and-coming mechanics and engineers from Motorsports Training Australia who crew for all their events, and with what I have seen before, do a really top job.

“The 86 is typically a reliable package and this team was one of the first to run it in Australia so hopefully Grant (Phillips) and I can score a good result to get their Series hopes back on track.”

“It’s been an interesting year to say the least, with the team knowing that this year would see a mix of co-drivers join us, hopefully each bringing their enthusiasm so that we can learn from them, and them from us.

“Cameron has an impressive background in motorsport, and at Winton, and has been really strong both last year and this season in the 86 Series so we’re keen to see what we can achieve together.”

The Australian Production Cars Series will again join the Shannons Nationals Motor Racing Championships, 9-11 June at Winton Motor Raceway for the second round of their six round season.