Highs and lows for Marston and Murphy in South Canterbury

Highs and lows for Marston and Murphy in South Canterbury 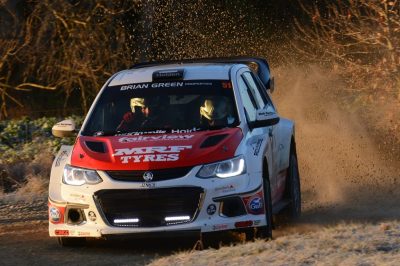 Josh Marston and Greg Murphy were both hoping for more from their first-ever run at the Rally of South Canterbury. Marston managed to bring his Holden Barina AP4+ home in sixth place, but Murphy’s car was side-lined by a fuel pump failure for the second time in three events.

Conditions were icy and tricky for the Penny Homes Holden Rally Team drivers and fellow competitors as they tackled the fourth round of the Brian Green Property Group New Zealand Rally Championship, a one-day rally on roads to the northwest and southwest of Timaru.

“A bit of an up and down day,” said Marston, of Christchurch, who moved into second place in the NZRC drivers’ standings behind rally winner Hayden Paddon. “We blew a boost hose earlier in the day and the car’s got a small misfire which we were unable to fix during the day. But apart from that, Andrew [Graves, his co-driver] and I went pretty well with some good stage times to end up sixth overall.”

Marston says he’s never seen anything like the icy conditions on the early stages. “It was so slippery. You were literally skating on it, and once it thawed out in the afternoon, the stages were great. The MRF tyres didn’t wear at all, it was so cold – the MRF softs were great.”

Havelock North’s Murphy agrees that it was hard to read the road.

“The shaded sections were particularly icy,” said Murphy who, with Timaru’s Mark Leonard alongside, started the day with a very handy fourth quickest time in the first stage. “There wouldn’t have been a competitor among us who didn’t have a moment or two. The stages were generally really enjoyable with some very long, high speed straights.”

As the fortunes of other top ten runners continually changed, Murphy and Leonard kept setting consistent top seven or eight times to hold fifth place overall after stage five. “At the first service after SS3, our guys picked up from the data that the fuel pump had an issue and it failed near the start of stage seven. It’s disappointing and frustrating, because until then the car had clearly been good and fast. The MRF soft tyres did their job perfectly, the setup suits the way I’m driving and it was a fantastic opportunity to drive these roads. We just wanted a finish. Our guys will need to delve deeper into what’s happening with the fuel and we’ll be back, well-sorted, for Rally Coromandel in August.”