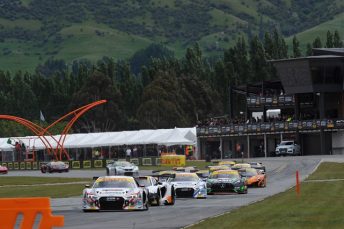 The CAMS Australian Endurance Championship is set to be decided this weekend at Highlands Motorsport Park as Australia’s most exotic racing cars descend on one of the world’s most exotic circuits.

The event will mark the end of an era for Australian GT, with this its last visit to the incredible Highlands facility.

For the second successive year Highlands will also bear witness to the Championship decider, with four teams still in contention for the crown.

Chasing them is the Autex Eggleston Motorsport Mercedes-AMG pairing of Dominic Storey and Peter Hackett, who are fresh from a break-through victory at the Hampton Downs 500 two weekends ago.

A tough weekend for John Martin and Liam Talbot aboard the Mega Racing Porsche 911 GT3-R saw them drop to third in the title chase last time you, but remain well in the fight heading into the weekend.

The only other driver in with a chance of the title is Fraser Ross, who will again be partnered by McLaren factory driver Alvaro Parente in the YNA Autosport/McElrea Racing entry.

The nail-biting Championship fight adds an extra layer to what will already be an emotional event as Australian GT holds its last race at Highlands, an occasion Shane van Gisbergen admits he simply couldn’t miss.

“It’s the last race there for a while, so I just wanted to go there and even be there, but Quinny had a spare car, so I can’t wait to go there and have some fun,” he said.

Van Gisbergen rates the Cromwell circuit among the best in the world, and is looking forward to the weekend.

“The event, the scenery, and then the track itself – there’s not much passing and no straights but its all corners, and all proper corners – as a driver, when you get it right, it’s pretty cool.”

It marks the first time the duo have joined forces in Australian GT, a feat made all the more special since van Gisbergen played a key role in Whiddett’s transition from drifting to circuit racing last year.

Looking to round the year out in style will be Roger Lago and David Russell aboard the JBS Australia Lamborghini R-EX, one of two examples in the field as Justin McMillan and Glen Wood return for the event.

At least one Lamborghini Huracan is set to make the field with Adrian Deitz and Cam McConville again sharing the duties in the Timken Zagame Autosport example, while Andrew Macpherson and Brad Shiels again have their choice between AMAC Motorsport’s Huracan or Porsche 997 GT3-R.

After a strong showing at Hampton Downs before mechanical dramas dropped them out of contention the BMW Team SRM entry of Steve Richards and Dylan O’Keeffe again make for an exciting blend of youth and experience.

Highlands’ resident professional driver Andrew Waite will again climb aboard the #7 Darrell Lea McLaren 650S GT3, after he and Tony Quinn put in an impressive performance at Hampton Downs to finish fifth.

Also impressing at Round 3 was the International Motorsport run Bolt Masters Audi entry steered by Andrew Bagnell and ex-A1GP star Matt Halliday, who return for the Highlands finale flying the flag for the local teams.

Two 40-minute practice sessions on Friday give drivers a chance to familiarise themselves with the busy Highlands Motorsport Park layout, before progressing into qualifying and Top 10 Shootout on Saturday.

Sunday’s action kicks off with a grid walk at 1150, allowing fans the chance to get up close and personal with the cars and drivers before the 501-kilometre race gets underway with its famous Le Mans start at 1240.

Fans can stay up to date with all the action from the track via Australian GT social media channels, Instagram, Twitter and Facebook, and get involved across the weekend using #AustralianGT