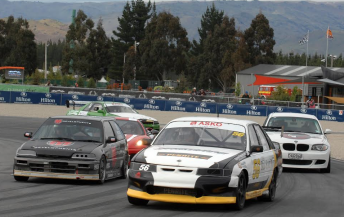 MEDIA RELEASE: A new three round race series open to clubsport competitors has been created by the team at Highlands Motorsport Park.

Dubbed the Highlands Sprint Series, the new grassroots competition takes place over three days in March and April, and includes an official test day prior to the opening race day.

“Many Kiwi competitors who aren’t eligible to compete at our higher profile events have expressed their desire to have a go at racing at Highlands and that’s why we’ve created the Highlands Sprint Series.

“The new Sprint Series features races for individual competitors in their eligible race car as well as dual sprint* races for competitors to get a chance to experience the circuit, the atmosphere and racing without the pressure of a full-on, door handle to door handle competition. It’s all about getting competitors of all levels to get into the sport, and we’re looking forward to a fun event for competitors to enjoy racing their car at Highlands.”

Sentch says the Sprint Series is open to all competitors with a MotorSport New Zealand (MSNZ) competition license and a vehicle that is MSNZ certified with a minimum half roll cage.

“Competitors will race on tracks A and C, rather than the full Highlands GT circuit, but they can be sure of a genuine Highlands’ race experience on this 2.9km circuit.”

The four race classes will be determined by lap times during practice and there will be five 6-lap races per round, as well as five races for the dual sprint competitors.

“These events are very much about enjoyment and participation for competitors, rather than creating a race spectacle. We’ll open the bar on level one of the pit lane building after each round with a happy hour for one hour after racing finishes.”

Competitors will earn points for each race and a ticketed prize-giving will be held after the final race on 3 April at The Nose Restaurant.

Competitors interested in finding out more about the Highlands Sprint Series are invited to email the race secretary [email protected] to receive the supplementary regulations and entry form or check the Sprint Series page at www.highlands.co.nz under ‘events’.

“Entries are now open and we look forward to three days of excellent racing from a wide variety of vehicles from around our region and further afield.”