Hickson has a grand night at Nyora Raceway

Hickson has a grand night at Nyora Raceway 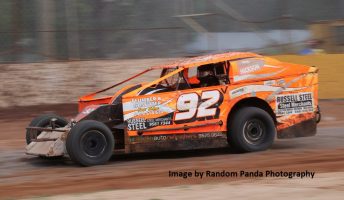 Other winners on the night included Ally Morrison in the Junior Sedans, Trish Dike in Ladies Standard Saloons and Warrick Taylor in Open Sedans.

The twenty lap final was in tricky conditions that could not be helped after one of the water trucks was put out of action during the night, the track went slick down low and dry and dusty higher up and the freight train of competitors kept their cars on the black trying to force a mistake on those in front of them.

Hickson was challenged by Hopkins and Clarke before going on to win from Clarke, Hopkins, Micheal Ardley and Mike Burke.

In Sports Sedan racing a couple fancied entrants had a tough night mechanically open the door for some local long time members to get in and amongst the leaders. David Donegan whom had come runners up a couple times over recent seasons at Nyora in Open Sedan events, finally took a win in the New Years Challenge from club legend Ray Gould who has been involved with the Nyora club for fifty years, both drivers were competing in Cortina’s. Broderick Stray then picked up a third place finish with Chris Miles and Darren O’Brien rounding out the top five.

Warrick Taylor won all three qualifying races for the Open Sedans before he went on to defeat Dale Mead, Daniel Angus, Scott Angus and Daryl Nicolson in the final.

Trish Dike won a tight tussle with Ashlee Wilson in the Ladies Standard Saloon final with Danielle Ardley finishing third. Earlier Sara Benson had won a couple of the qualifying races and looked the driver to beat, however her car crashed in another feature race and she was unable to join the field.

Junior Sedan racing had a mixture of A Grade and B Grade competitors with Ally Morrison from Officer and Connor Donegan the front runners. Morrison won two of the three qualifying races and Morrison the other before Morrison took the feature win from Donegan, Logan Mair, Tenayah Barton and Kiarna Barton rounding out the top five.

The Standard Saloon final was declared a non result when a big crash on lap one and in turn one took out the cars of Shane Ardley and Brendon Miles with extensive damage and earlier in Open Sedan racing Mick Evans had torn up his V8 Torana when he collected the concrete hard on the back straight.

Nyora Raceway will now break for a little while and return on February the 10th with the Miles Cup for Standard Saloons, the Victorian Grand Prix Midget title and Ladies Crash and Bash the feature events.