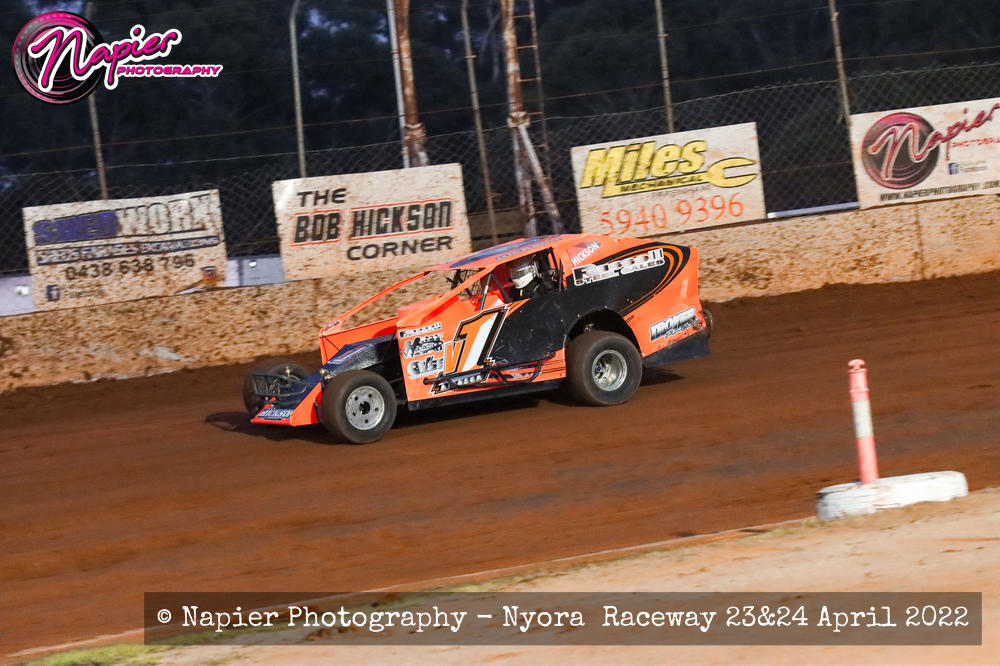 Nyora Raceway proudly produced one of the biggest shows in Victoria for the season with the running of the Dirt Modified Victorian title followed up by a big dollar feature on the Sunday night for the ‘Russell Steel & Mornington Motors Dirt Modified State Challenge and the Ramsdale Wreckers Modified Sedans Cup, with Wingless Sprints, Juniors, and Sports Sedans campaigning on both nights of the two-night show.

Cars from New South Wales and Queensland had joined the local Victorian contingent for the Dirt Modified action with three heats and a final on night one determining the new Victorian champion.

On night one gun Queensland racer Kevin Britten won the first heat race smokin’ around the bull ring in 14.562 seconds to defeat a couple of New South Welshmen before locally race raised Nyora product Todd Hobson won the second heat race. Daryl Hickson another Nyora Raceway product won the third heat to close out round one when he beat Scott Cannon. Hobson doubled his wins with another in round two with Chris Corbett from New South Wales picking up a win along with Queenslander Mitchell Randall. Hickson won a second qualifier for himself in round three as did Randall whilst Hobson won his third from three starts on the night.

In the state title race, Hickson lead lap one from Randall, Hobson, Dale Corbet and Chris Corbett. At the five-lap mark Hobson was back into second spot however his race would soon end up with him and his car parked infield. Hickson led Randall, Chris Corbett, Kevin Britten, and Scott Cannon at lap ten and by lap twenty Cannon and Britten had swapped places. Randall exited the race within striking distance of the finish and at the chequered flag Hickson had taken the win ahead of Chris Corbett, Cannon, Zeke Edwards, and Tyler Scott.

Into night two of racing with the Dirt Modifieds State Challenge big dollar race sharing the spotlight with Modified Sedans Scott Cannon, Bret Clarke, Todd Hobson, and Randall won the four heat races where the points from night one’s qualifying added to the qualifying races on night two. Hobson and Hickson started at the front of the field with Hobson leading lap one as Hickson found himself in early strife dropping behind Randall, Brett Clarke, and Dale Corbett.

Ten laps into the race the top five positions remained the same and again at the fifteen-lap mark with only Wayne Simpson out of the race. On lap twenty-one Hickson lost spots to Brock Gardiner and Cannon and at the thirty-lap mark as the chequered flag dropped, Hobson would take the big victory in the state challenge from Randall, Clarke, Dale Corbett, and Cannon.

Some big cash money was on offer for the Modified Sedans line-up with four heat races to determine the starting field for the feature race. Aaron Bunton won the first qualifier with Victorian Champion Kye Walters taking victory ahead of Bunton in the second. Walters wo the third qualifier also before Marcus Reddecliffe from Nyora club winning the fourth.

Night two action for the Sports Sedans resulted with a father – daughter driver swap in the Bent family Falcon and Shona did her family proud as she won from Caleb Lincoln, Bernie Franklin, Justin Alberni, and Matthew Bronson.

Wingless Sprints second night feature race finished with a win to Morwell speedway veteran Peter Logue when he was too good for his own son Wayne Logue. Jake Warren finished in third with Aron Lawrence and Christopher Temby rounding out the top five.

Nyora Raceway is back on May the 7th with a huge Demolition Derby night to attract a packed house of fans. The Street Stocks will be on track for a feature race the Street Stocks 1000 and Fireworks will also once again keep the families happy.

Nyora committee would like to thank Russell Steel and Mornington Motors for their financial support for the Dirt Modifieds, Ramsdale Wreckers for their support for the Modified Sedans and Redde Race Parts and ML Automotive for supporting Wingless Sprints racing for the weekend.