Hicks and Maroske on the pace

Hicks and Maroske on the pace

All the hard work and developments that has gone into Brian Hicks-owned Compact Speedcar have certainly paid off, with the car owner’s 2018-19 season going to another level with new driver Cody Maroske. 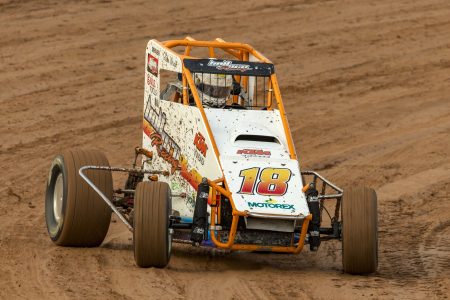 While the Burleigh Heads, Queensland-based car owner initially got his speedway venture underway as a driver in the 1970s, racing A Grade Sedans before transitioning to road racing in the 1990s, where he piloted an Alfa Romeo in the Sport Sedans division, he later made the decision to take up the reins as a car owner.

Returning to the speedway fold following a decade-long break from motorsport, Hicks purchased a Modlite and invited long-time friend Jamie McHugh to take up driver duties, with the formidable duo going on to pick up multiple Australian and Queensland Title wins.

Making the move into Compact Speedcar class two seasons ago, Hicks’s package is a unique one, with his Qld # 18 Spike car being powered by 1190cc KTM motorcycle engine, and it’s been thanks to his friend Allan Reekie’s long association with KTM the company has thrown their support behind Hicks, making his machine even more competitive.

“The whole aim of our team is just to have some fun and be competitive along the way, and within only a handful of shows, Cody is doing a great job,” enthused Hicks.

“The support we’ve received from KTM Australia has been very helpful and it’s all thanks to Allan’s long association with them, and it’s certainly played a part in helping take our car to another level.”

Making his debut in Compact Speedcars during the 2017-18 season with driver Glenn Wright behind the wheel which was highlighted by narrowly missing out on the Australian Championship win at Kingaroy Speedway after finishing in second, Hicks then offered Maroske midway through this season, after Wright decided to concentrate on Speedcars racing.

Having only completed three race meetings together since the Christmas-New Year period, the pair has already proved that they’re a combination to be reckoned with, with Maroske, who was the 2010 National Junior Sedan Champion, finishing in minor podium positions in his opening two outings, before going to another level to claim his maiden feature-race win with the class recently at Brisbane’s Archerfield Speedway.

“I’ve known Brian for as long as I can remember and I was more than happy to get the call up to race his car and get some laps under my belt this season,” commented the 25-year-old racer, who is currently taking a break from 410 Sprintcar racing, due to budget constraints.

“I have to say a big thanks to Brian for giving me this opportunity because I’m currently on the sidelines, and I’m now looking forward to seeing what else we can achieve together for the rest of this season.”

For the remainder of the 2018-19 season, Hicks and Maroske plan to contest the full Compact Speedcar schedule throughout Queensland. Their next outing will be at Archerfield Speedway this Saturday night (February 9).