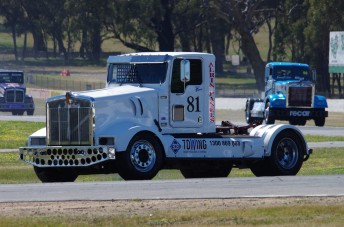 Meanwhile, Frank Amoroso overcame some difficulties in qualifying to leave the event with an increased points buffer leading into the final round at Wakefield Park in November.

Hewat qualified on pole position ahead of reigning Champion Steve Zammit, with South Australian John Bomberle third. Amoroso qualified well down the order in 10th, only completing two laps in the session due to some fuel pressure problems.

Hewat led Zammit and Bomberle to the line in Race 1, while Amoroso came home 10th after a costly off-track excursion on the first lap.

Zammit turned the tables on Hewat in Race 2, making an opportunistic pass in Turn 2 to snatch the lead before driving to victory. Amoroso worked his way up to eighth while the major action happened on the last lap, when Paul Reyntjes speared off the circuit with a delaminated tyre.

Race 3 featured a reverse-grid based on the Race 2 finishing order. Frank Amoroso rapidly worked his way to the lead with a strong start, and then defended ferociously from a queue of faster trucks including Hewat, Shane Gray, Bomberle and Reyntjes.

Eventually Hewat overtook Amoroso, who held on for second ahead of Shane Gray.

Race 4, the 10 lap Super Prix, also featured a reverse-grid format and again Amoroso led early, before he was passed by Hewat and Zammit and relegated to third.

The trucks also held a pair of team’s championship races on Saturday, which were won by the Isuzu light trucks of Mitch Quirk and Craig Yardy.

The Vic V8s, which held their final round of 2014 at Winton, produced a mixture of Holden and Ford victories. Graeme Meer won the first two races in his VH Commodore, but engine problems forced him out of Races 3 and 4, handing the victories to Albury driver Greg Jones (Ford EF Falcon) and Allan Argento (Ford XB Falcon Coupe).

Jones won the round from Argento and Glenn Bethune, while the consistent Mark Kakouri won the championship by finishing fourth overall.

In a freshly-built car, Keven Stoopman was unstoppable in the V.E.K. Tools Pulsar Challenge races, winning all four races despite starting the final from the rear of the grid. Defending champion Max Healy was second overall ahead of Matt Thewlis, who gained places with strong starts in each race.

Peter Green Jnr, who had won the previous three rounds of the series, struggled for engine performance and finished a lowly sixth for the meeting.

The Coulters bounced back in Races 3 and 4, Michael twice breaking the lap record that had been held by Andrew Miedecke since 2001.

The Super TT race wins were shared between Greg Jones and Corey Gooch but the overall round victory went to Stephen Harrison, ahead of Ethan Wilson and Robert Hart, who finished all three races.

Jarrod Tonks won the Victorian Excel Series round after an intense battle with Nathan Blight and Adam Bywater. Blight retired from the final race, handing second for the round to Bywater and third to Bronson Mercieca.