Heritage Touring Cars will bring a strong field of classic Group C & A Australian touring cars to Queensland over July 13 & 14 for the Historic Racing Car Club Queensland’s Historic Queensland. After a record-breaking event in 2018, we’re looking forward to returning to Morgan Park Raceway to contest round three as we cross the mid-point of the 2019 Heritage Touring Cars series. 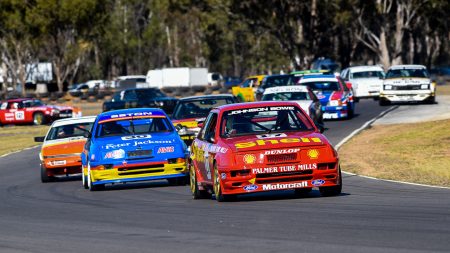 Two Group C cars will make their Heritage Touring Cars debut at Historic Queensland, both fresh from restorations in the Sunshine State. Tony Grant will have his first run in the series over the weekend and is bringing a 1978 RA40 Toyota Celica out to play. The car was raced in period by the late Wally Scott from Queensland and was restored by Peter Herlihen in Warwick, just a short jog from the track.

Heritage Touring Cars veteran Phil Verwoert is set to hand the keys to his RX-7 to a new custodian, and will be debuting a 1983 VH Commodore at Morgan Park. The car was raced by Fred Geissler in the 1984 Bathurst 1000 and is fresh from a restoration by Glenn Gerstel at Blaze Performance on the Gold Coast.

After Holden dominated the Group C entry at Bathurst earlier in the year, the Fords will be out in force in Queensland. Representing the big V8s is the Army Reserves XD Falcon of Frank Binding and the ex-Murray Carter XE of Glenn Gerstel. Carl Muller will be back on board his ’83 Capri, while Russell and Greg Keam are sure to produce some great racing in their Bob Holden Escorts.

Gavin Adamson and Steve Axisa will go head to head in a pair of Isuzu PF60 Geminis, while Peter Woods will be back to take a crack at the 2-3 litre Group C touring car record he absolutely smashed last year in the Volvo 242 GT.

Sticking with the European theme as we move into Group A, and David Harris and Peter Jones will bring a pair of JPS BMWs to the event. Harris will run an ’85 325i, while Jones will be on board the M3.

Holden fans will have four Group A cars to cheer on in Queensland. After winning the handicap race at Morgan Park in 2018, Wayne Clift will add another round to his impressive career driving the Deluxe Coachlines VK Commodore that he built in 1986.

John Douglas will pilot the ex-Brian Callaghan VL ‘Walkinshaw’ Commodore that finished sixth in the 1988 Tooheys 1000, when all the other Walkinshaws had a shocker. Mark Taylor will drive a VL Commodore with four years of Bathurst history under its belt, currently running in its 1990 livery when it was driven by Paul Trevethan and Andrew McDowell. Adrian Allisey will run an ex-Leeson/Willmington Walkinshaw VL.

Toyota will be well represented at the event. Bob Holden will drive his signature Bob Holden Motors FX-GT from 1988, with David Paterson joining him in the second Bob Holden Motors car – his ’83 Sprinter. Craig Foster will bring out a piece of Toyota Team Australia history with his AE86, the last of the factory-built Toyota Team Australia AE86s to make the journey to Australia, and John Abbott will drive the ex-Peter Williamson MA61 Celica Supra. Craig Neilson completes Japan’s Group A presence at the meeting with his ’83 Mitsubishi Starion.

To cap off with the big guns, Tony Karanfilovski and Terry Lawlor will unleash a pair of Ford Sierra RS500s on Morgan Park. Tony had his first drive of the ex-Glenn Seton Peter Jackson Ford Sierra RS500 last year and is going strong. Terry completed a clean sweep of round two at Bathurst back in April and is sure to be quick in the 1990 Dick Johnson Shell Sierra.

Historic Queensland will be held at Morgan Park Raceway over the 13th & 14th of July. Admission is $20 per day or $30 for the weekend for adults, $15/25 for concessions or free for kids under 15. Queensland hospitality is legendary, so make sure you don’t miss this one – we’re certainly looking forward to another brilliant weekend at Morgan Park!

For more information about the event, head to the HRCC’s website at www.hrcc.org.au, and stay tuned to www.heritagetouringcars.com.au for more from the Legends of Bathurst.