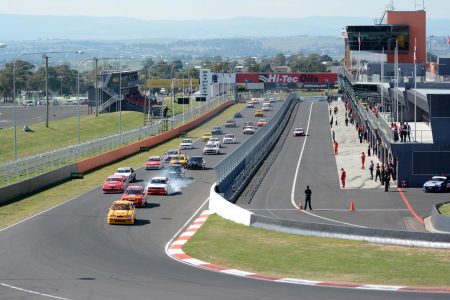 Image by, and thanks to, Brent Murray – At Speed Images

The Heritage Touring Cars series’ Legends of Bathurst are set to conquer The Mountain this weekend, when they’re let loose around Mount Panorama at the Hi-Tec Oils Bathurst 6-Hour. A magic field of 25 muscle cars will take to the track to contest Round Two of our 2019 series over the Easter weekend, Friday the 19th to Sunday the 21st of April.

Heritage Touring Cars will run as a support category to the Hi-Tec Oils Bathurst 6 Hour, returning to Australia’s most iconic circuit for the first time since 2017 for practice, qualifying and three races.

Practice and qualifying will be run on Good Friday, the 19th of April, before we get stuck into racing on Saturday the 20th. Race one will see us heading out at 10:20AM on Saturday. We’ll be on track again for race two at 4:30PM to bring the golden age of Australian touring car racing to life in golden afternoon light.

The Bathurst 6-Hour will take the spotlight for most of Sunday, but we’ll be delaying our Easter egg hunts to give spectators a show in our final race of the weekend at 8:30 on Sunday morning.

Group A will be very well represented at the 6-Hour, with fifteen of the cars set to race. The Toyotas have come out to play in force, with Bob Holden, David Paterson, Ian Helsdon and Craig Foster all running Corollas and John Abbot in the ex-Peter Williamson MA61 Celica Supra. They’ll be joined by Craig Neilson in his ’83 Mitsubishi Starion.

The iconic Ford Sierra RS500 will be well represented at Bathurst, with three of the cars set to compete. Steve Webb will pilot the ex-Colin Bond Caltex car, with Terry Lawlor in the ex-Dick Johnson Shell RS500 and Tony Karanfilovski in Glenn Seton’s Peter Jackson drive. Meanwhile, Greg Keam looks to shift things up a little, running the 1984 FOX Ford Mustang.

Holden will be represented by Michael Logiudice and Mark Taylor. Logiudice will be back on board the ex-Billington/Crosby VK Commodore that he debuted at the Phillip Island Classic. Taylor will run a VL that has four Bathurst 1000 starts to its name and was recently restored to its 1990 specification and livery, when it was run by Trevethan and MacDowell.

After a strong presence at Phillip Island, we’ll be joined by just two BMWs at Bathurst. David Towe’s JPS M3 debuted on Mount Panorama in 1987 at the James Hardie 1000 in the hands of Jim Richards and Tony Longhurst, finishing fourth overall with a class win. Bill Cutler’s ex-Roberto Ravaglia/Emanuele Pirro Schnitzer car also has history on the circuit, competing in that same race.

Tony Pallas will bring the most cylinders to the mountain and is surely looking forward to unwinding the V12 of his Group A Jaguar XJS down Conrod.

It’s Holden domination in the 1973 to ’84 cars of Group C, with seven examples of the marque set to challenge three of Ford’s classics. Kicking off with the lighter cars, seasoned Heritage Touring Car Series competitors Russell Keam and Justin Matthews will bring two Escorts and some great racing to the event. Ed Singleton will lead the Ford horsepower race in the mighty 351 cubic inch John Goss K-Tel Falcon XC, which is back in its white K-Tel livery and returning to Bathurst for the first time in forty years.

Victoria’s Anthony Sawford will bring out the ex-Allan Grice Craven Mild A9X to join Shaun Tunny in the ex-Bob Forbes/Kevin Bartlett A9X. Robert Ingram will join us in the Group C Holden Torana A9X that he debuted back in March at the Phillip Island Classic and Stephen Perrott will be running a Roadways A9X Torana.

Lindsay Woollard will be on board his Re-Car Commodore VC, with Jeffrey Trembath in the storied Advance Australia VC that then-reigning Formula 1 World Champion Alan Jones piloted with Warren Cullen in the 1981 James Hardie 1000. Milton Seferis will pilot a third Commodore in the ex-Peter Janson Commodore VH.

The historic Australian Group C and Group A touring cars of the Heritage Touring Cars series racing at Bathurst is an opportunity to glimpse back into the golden days of Australian touring car racing. Don’t miss it!

The 2019 Hi-Tec Oils Bathurst 6-Hour will head to Mount Panorama over the 19th to the 21st of April. For more information about the event including the other categories and up-to-date scheduling, see the official website at www.bathurst6hour.com.au.

Stay tuned to www.heritagetouringcars.com.au for more from the Legends of Bathurst.