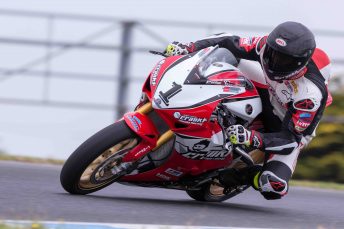 MEDIA RELEASE: Defending Yamaha Motorcycle Insurance Superbike champion Troy Herfoss will have a target firmly placed upon his back when debuting the number one plate in this weekend’s opening round of the Yamaha Motor Finance Australian Superbike Championship presented by Motul Pirelli (ASBK) at the Phillip Island Grand Prix Circuit.

After capturing his first-career ASBK crown last season, Crankt Protein Honda Racing’s Herfoss has his sights set on back-to-back championships in what’s shaping up to be a season for the ages. It all gets underway between 23-26 February alongside the Yamaha Finance round of the 2017 Motul Superbike World Championship.

Armed with the CBR1000RR SP that he won last year’s title aboard, Herfoss and the factory Honda organisation await delivery of the highly-anticipated, updated 2017 version which is poised to arrive in the latter-stages of the seven-round season. For 29-year-old Herfoss, he’s comfortable in beginning his defence utilising a proven package.

“I’ll definitely be comfortable from the outset,” Herfoss explained. “Phillip Island is one of the more challenging circuits for us, but it’s just about trying to get through the first round as competitively as we can and then we will start from there. Ideally it would have been nice to start the season on the new bike, but we’ve made some improvements and will definitely be competitive in the races. I’m as excited as ever to get out there and it’s so competitive this year, which keeps the spark high to go and try defend this championship.”

With added competition confirmed on the grid for this year in the form of multiple national champions, ex-internationals and a host of supremely-skilled rookies, Herfoss welcomes the challenge entering Phillip Island. As far as he’s concerned, the priority is to extract the most from himself and his Pirelli-shod Fireblade in a bid for successive series wins.

“At the start of the year there’s always a lot of interest in the guys stepping up, so we’ll have to see who will be fast over race distance,” he continued. “My teammate Bryan [Staring] and also Josh [Waters] will definitely be contenders in returning to the championship, so that’s an added challenge alongside the regulars for this season already. We’ve just got to keep doing what we’ve done in previous years – focusing on ourselves – and hopefully that will be good enough to deliver another title.”

With opening practice sessions due to take place tomorrow, round one of the 2017 ASBK championship will feature three 12-lap races in the YMI Superbike ranks, a trio of 10-lap Supersport races and three races held over 10 laps in the Supersport 300 division.

To purchase tickets and camping for the Yamaha Finance round of the 2017 Motul Superbike World Championship visit www.worldsbk.com.au or Ticketek. Check the new-look www.asbk.com.au for detailed information on the 2017 Yamaha Motor Finance Australian Superbike Championship presented by Motul Pirelli (ASBK)