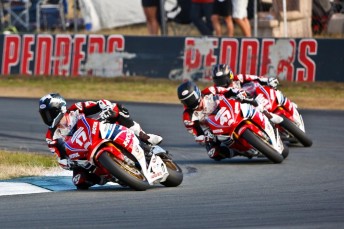 The Honda rider secured his first ever round win after a consistent day on the bike at Queensland Raceway, managing a second, first and third from his three races.

Series leader Wayne Maxwell (Team Motul Honda) was able to extend his lead at the top of the overall standings thanks to a second overall on the day – his third, second and fourth place finishes in the three races enough to keep BikeBiz Racing Kawasaki’s Sean Condon at bay in third.

With two New South Welshman and a Victorian on the podium, it was up to Mike Jones (Crazy Dogs Kawasaki) to fly the flag for Queensland – an improved second placing in race three seeing the pilot manage fourth overall.

The round means Maxwell increased his overall series lead to 25 points from InsureMyRide Honda rider Glenn Scott, with Jones and Herfoss a further 23 points behind.

In the Supersport class, Maxima Yamaha rider Aaron Morris recorded back-to-back wins to take the outright honours on the day.

With the event reduced to two races, Morris finished on 50 points and well clear of three riders all tied on 38 points.

The trio tied on points were Chris Quinn, Aiden Wagner and Callum Spriggs and after finishing in second, third and fourth respectively in the final race, that is where they ended up in the outright standings.

He finished the day 10-points clear of Jack Baker (third, second and third from his three races) and a further four points ahead of Sophie Lovett who rounded out the day’s top-three.

The result put Demmery into a commanding 43.5 point lead in the overall championship standings ahead of Kyle Buckley

In the Kawasaki Ninja FX 250 category, Grant Jordan took two wins from three races to take the round victory from Joshua McHenry (second, first and second) and Craig White (fourth, third and third).

It was enough for McHenry to take the slimmest of leads (half a point) from ACT racer Benjamin Green in the outright positions.

Angus Reekie retained his hold on the Nakedbikes – F1 class with three wins from three races, while Craig McMartin made it a clean sweep of all three races in the Pro-Twins F1 class.