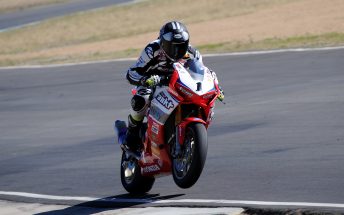 With a recently resurfaced track, the conditions yielded quick lap times and plenty of grip. As the track temperature climbed and rubber was put down, the times started to tumble.

The Test allows riders and teams to prepare for the critical Round 5 at Morgan Park Raceway (August 25-27). Preparation includes coming to terms with the new surface, running race simulations and experimenting with different setups.

The day belonged to Herfoss and Crankt Protein Honda Racing Team as the Champion posted the fastest time of 1:13.448 in the final session. Herfoss would manage to set a new YMI Superbike track record, further confirming the quality of the Morgan Park Raceway Surface.

Herfoss shared his thoughts after setting the quickest time of the day; “We are happy with how the first day has gone. It was a little bit of a slow start. However, the new Crankt Protein Honda Racing Team’s CBR1000SP2 machine is working really well with the new surface. Although the circuit is a little bumpy in certain areas, it’s got more grip with the new surface. We are just trying to improve the lap times or at least be able to hit that lap time more consistently, so we can finish up here tomorrow with a good race pace, that way we can be strong first up for the race weekend, at the end of the month,” Herfoss finished.

Corey Turner (Desmosport Ducati) had a very impressive transition to the V-Twin powered Ducati, finishing fourth with his new team. Tuner will replace Callum Spriggs for the remainder of the season, after Spriggs sustained a shoulder injury, ruling him out for the final three rounds of the championship. Daniel Falzon (JD Racing, YZF-R1) finished a respectable fifth in the overall lap standings, approximately half a second off the top of the timesheets.

Quinn shared; “We have fiddled around with a few things today on the Coopers HXR Yamaha. The first session we went out with just a base setting.

“The second we got a good time, but in the third session we had a bit of a mishap. The gear shaft selector broke, so we missed a few laps there. We just wanted to try a lot of changes in that third session to see what way to go. We have found a good direction. Tomorrow we will put some new tyres in and go again.

“Tomorrow we will be working on lap times as we have our setup pretty close. The Yamaha YZF-R6 is working very well. We will make few minor changes here and there, but really we will just put the head down and go for it.

“We won’t do any race runs, as we know the tyres can do the race distance here and I know I’m fit enough to do the race distance. We just want some consistency. So overall, we are happy with our first day here at Morgan Park Raceway,” Quinn finished.

Tom ‘Torpedo’ Toparis (Cube Racing, Kawasaki, ZX-6R) broke though with a lap time of 1:16.741, to have the second best overall time of the day.

Sam Condon (BikeBiz, Yamaha YZF-R1) was strong throughout the day to attain a lap time of 1:16.968, to achieve third best time.

Championship leader Ted Collins and Mark Chiodo (Repsol GAS Racing, Truimph Daytona 675R), took out the remaining places in the top five. It will be interesting to see if these typical frontrunners improve their positions on the timesheets tomorrow.

Young gun Oli Bayliss (Cube Racing, Kawasaki Ninja 300) would top the overall timesheets for the combined Hi-Tec Batteries Supersport 300 and YMF R3 Cup sessions, with a lap time of 1:24.420 in the fourth session. Bayliss had an extremely productive day, taking confidence after his wins back at Round 4 Hidden Valley Raceway.

Bayliss shared; “Overall, today has been really good. The first session went really well for the Cube Racing Team and I. Ended up riding my number one bike, which I’m fastest on.

“Second session, I made some changes to the second bike such as handle bar settings and suspension changes. However, we sort of went downhill from there, because the changes didn’t work out. I had a lot of chatter on the front and simply couldn’t get the speed that I wanted.

Thankfully in the last session I got it back together and posted my overall fastest time.

Tomorrow the team and I will focus on trying to get consistent times. I would really like to get into the high 1min 23’s. It’s a tall order, but hopefully with great weather and new Pirelli tyres we can hopefully achieve it,” Oli finished.

Max Croker (KTM Australia, RC 390) on his ‘Over 300’ machine finished of the day with the second best overall time of 1:24.660. Croker was strongest in the second practice session of the day and wasn’t able to improve on his time in the latter stages of the test.

Reid Battye (DB Racing, Kawasaki Ninja 300) also pulled off an impressive display to finish third overall with a lap time of 1:26.076. Third overall in the times marks a solid debut to joining the BCperformance Junior Team.

Round 5 of the ASBK will take place at Morgan Park Raceway 25-27 August.