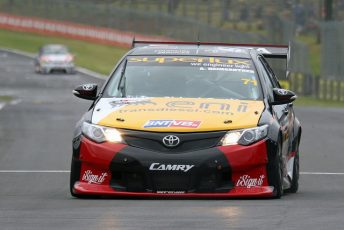 Andre Heimgartner has claimed victory in race three of the BNT V8s at Pukekohe Park Raceway this afternoon, setting the fastest lap of the race on his way to the win and second for the round.

After starting the race 18th thanks to a reverse starting grid, the 22-year-old Kiwi moved himself through the field to take the lead and then the win in the Richards Team Motorsport Camry, supported by Superlux.

This afternoon’s race victory comes after the Melbourne-based racer brought home second in this morning’s safety-car marred second race of the weekend, with the #71 entry showing potential to challenge for the lead but simply not having enough green lap running to make a move.

“After Saturday’s terrible rain where we just couldn’t see anything with severe windscreen fogging, it was great to have much better weather today,” Heimgartner said.

“We didn’t have much green running in the first race this morning due to a number of safety cars, but we managed to move up one position from third on the grid.

“Race three again had a number of safety cars, but we managed to get into the lead just before the final one was brought out for oil over the track – which was lucky as the race ended up being declared soon after.

“We had worked on car set-up and I was able to drive the car with more confidence in this race which was rewarding, and to bring home second for the round despite the issues yesterday is something I am satisfied with, especially as we essentially started from scratch set-up wise on Friday as I had never driven the car before.

“It is always great fun racing at home and this weekend has been no different – I can’t thank everyone enough for all of their support.”

Heimgartner will return to New Zealand across December 1-3 for the next round of the BNT V8s season at Taupo Raceway.