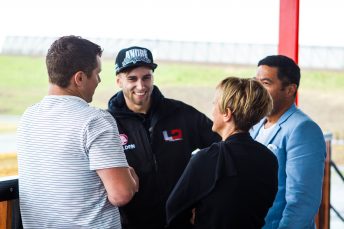 Ahead of what is his home-round at Pukekohe Raceway this weekend – which is also the penultimate round of the 2016 Virgin Australia Supercars Championship – Heimgartner was joined at Hampton Downs by members of the media in cutting some laps, including TVNZ’s high-rating ‘Breakfast’ television program.

The 21 year old participated in a number of live crosses throughout the morning before taking on the crew in a challenge around the 840m circuit which will be hosted as part of the program’s Friday morning show.

“It was really great getting out here to this amazing new facility one day ahead of its opening and cutting some laps,” said the 21 year old, who is now the holder of the lap record for the go-kart track, which opens to the public on Thursday, 3 November.

“Sam Wallace for TVNZ’s Breakfast in particular was super keen, and obviously loves his motorsport. It all got a bit competitive out there, and a great time was had by all. 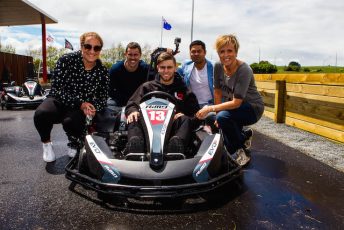 “For this weekend, it is certainly an important weekend for me personally as a proud Kiwi – to have some success at home would be very meaningful.

“After a couple of tough breaks at the last few rounds when we have been in the running for results inside the top ten, I am hopeful my home-town has some better luck in store for me and hopefully we can put together a strong package to bring home a good result.”

For the TVNZ Breakfast line-up, the morning out at the track was the perfect start to their ITM Auckland SuperSprint weekend.

“I managed to get in lots of practice, I wanted to win!

“It was great to chat with Andre out here at Hampton Downs this morning and I am looking forward to catching up with him at Pukekohe Raceway this weekend – the entire TVNZ Breakfast crew will be barracking for him I am sure!”

Heimgartner will hit the track at Pukekohe Raceway on Friday 4 November for three practice sessions, ahead of two lots of qualifying and racing on Saturday (5 November) and Sunday (6 November) respectively.