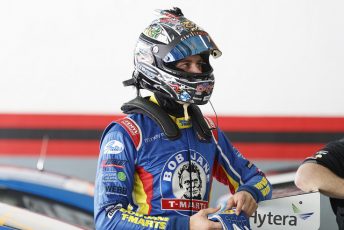 After a massive October which included a top ten Supercars finish at the Bathurst 1000, a podium on debut in the Blancpain GT Asia Series, and a maiden Supercars podium on the Gold Coast; Andre Heimgartner is on his way home to New Zealand.

The Melbourne-based Kiwi will compete at Pukekohe Raceway this weekend in the BNT V8s category, which is racing as part of the penultimate round of the 2017 Supercars championship.

It has been a big four weeks for the 22-year-old, who also took out the Carrera Cup Australia round win at Bathurst before claiming second in the 2017 Carrera Cup Australia title at the Gold Coast by the narrowest ever margin for the category (just 20 points separated Heimgartner from winner David Wall).

Now, he will make his return to New Zealand national competition by suiting up aboard a Richards Team Motorsport Toyota Camry for the BNT V8s – a category in which he last raced as a 16-year-old in a Holden Commodore.

“A lot has happened in the last month, let alone the last six years!” laughed Heimgartner.

“I am really looking forward to coming back to the BNT V8 Championship – the place I made my touring car debut as a 16-year-old.

“A lot of things have happened since I was a nervous kid having my first taste of SuperTourer competition in 2012, and I am really excited to return to my roots and be amongst old rivals and friends once again.

“I hope to not only contest this weekend at Pukekohe Raceway, but also come back for the rest of the season. Time will tell on that, with international racing commitments currently still up in the air.

“In the meantime, I will just be concentrating on doing the best job I can for Lance Hughes, Peter Johnston and Stephen Richards who have made a BNT V8s season drive very attractive – I always love racing at home, and I expect to have a lot of fun this weekend.”