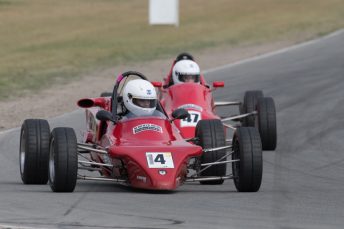 The opening round of the 2017/18 New Zealand Formula 1600 Championship gets underway in Timaru on Saturday and a thirteen-year-old from Auckland is set to raise the level of competition. Doubling as the second round of the South Island F1600 Championship, Callum Edge makes his debut in both series and joins a new wave of rookie drivers that made an impact a fortnight ago in round one at Ruapuna, Christchurch.

Hedge will compete in last season’s championship winning car, a Mygale SJ08A that was driven by Pukekohe teenager Liam Lawson. He comes with a wealth of kartsport experience and is the current Junior Rotax and Junior Yamaha national champion. He is also currently competing for his second season in the SsanYong Racing Series (ute) in the North Island.

“I’m looking forward to racing in Timaru,” commented Hedge. “Our aim is to learn and get some good results and points for the national series.”

Winner of the opening SI F1600 round and leading on points is Southland’s Jordan Michels. It is Michel’s third season competing in F1600 and he has experience on his side.

“We’ve made great progress over the winter,” said Michels. “We’ve got a great group of guys in the team and a well-developed car. Timaru has been good to me in the past and it’s great to have a round just two weeks after the first as it helps to carry the momentum from Ruapuna.”

One of several new rookies to make an impact at Ruapuna was Christchurch driver Bailey Paterson. Paterson won the opening race and went on to finish runner up in the remaining two races to Michels.

Another kartsport rookie expected to be competing at the front is Josh Bethune from Aukland. Bethune showed real speed at Ruapuna qualifying second behind Michels, but was hindered by a mechanical dnf in the first race.

Over twenty entries are expected to compete for both overall points and within three Classes (1,2 & 3). Winner of the SI F1600 scholarship, Nelson rookie Matt Butchart returns after making an impact at Ruapuna. Butchart was on track to win the Historic Class 3, but a fuel issue saw him not finish the third race. This class is proving to be very competitive with current SI Historic Class 3 titleholder Roger McKenzie finishing second in class to Joseph Oliver while current national titleholder Andy Downs (Lola 642E) was third.

Drivers and teams will face qualifying and three races at the Timaru International Raceway on Saturday.