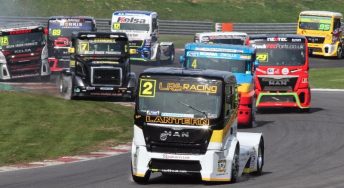 Thruxton is gearing up for a heavyweight festival of high-octane action this weekend (3/4 June), as the thunderous British Truck Racing Championship makes its annual visit to the fastest circuit in the UK.

One of the jewels in the British Automobile Racing Club’s crown, the British Truck Racing Championship (BTRC) has already enjoyed two pulsating rounds this season and the unpredictable thrills ‘n’ spills look set to continue.

Producing more than 1,200bhp and weighing upwards of four tonnes, these race-ready monsters will duke it out for supremacy in ten contests around the ultra-fast Hampshire circuit – five for each class, ensuring there is plenty of bang-per-buck.

Division One, which is for the more modified trucks, sees defending champion Ryan Smith lead the way at this early stage having enjoyed a strong start to the campaign. Currently holding an eight-point margin at the summit of the standings, Smith will be keen to extend his advantage over the likes of Somerset’s Shane Brereton (image below top right), multiple champion Mat Summerfield, Stuart Oliver and David Jenkins.

In Division Two, things are equally as competitive with the wonderfully named Mika Mäkinen in control. These trucks might be closer to standard production specification, but they are every bit as close on-track and with just ten points blanketing the top four in the classification, expect to see the wick turned up further.

The track action doesn’t stop with the BTRC, either, with a bumper bill of support series to whet the appetite too. The exhilarating package of entertainment will continue via the MG Owners’ Club, Hyundai Coupé Cup, Kumho BMW Championship and Mighty Minis.

Away from the racing, there is set to be plenty of family fun around the circuit and trade stands, whilst the show truck display will undoubtedly catch the eye.

“It is always exciting when the trucks come to Thruxton,” enthused Thruxton Group Managing Director Bill Coombs. “Nothing comes close to this kind of racing in the UK, and it is invariably a memorable event to see trackside.

“The championship is in a great place at the moment, and it is quite a sight to watch these machines tackle the sweeping curves of Thruxton whilst dicing wheel-to-wheel. We’re expecting another bumper crowd, and if you have never been before then you’re missing out. It really is a thrilling weekend of adrenaline-fuelled racing.”