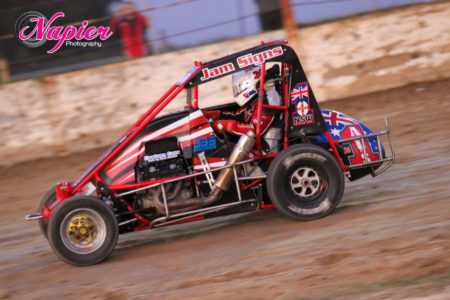 The Victorian Compact Speedcar Club 1Stop Property Services Victorian Title has been run and won at Rosedale Speedway with the nations number one driver Mark Heaton visiting from New South Wales and adding to his New South Wales and Australia number one accolades when he secured victory ahead of defending champion Louis Rodriguez and former national champion Justin Paull.

With the nation struck down by Coronavirus and government suggested restrictions on gatherings, the Victorian Title still might yet be the last opportunity to win a Championship this season for Compact Speedcar competitors, and as a result the intensity to win lifted a notch.

Qualifying race draws split the field into two heats per round for three rounds in order to give drivers the best chance to all make it through to the twenty-five-lap feature event. Terrible luck for Jamie Paull before a lap had been turned when he discovered his engine had a blown head gasket.

Ash Booker (# 66 Yamaha – R & K Alignment & Exhausts) who had recently won the Legend’s Trophy event at Wangaratta kicked the night off with a win in the first of the six qualifiers. Booker defeated Butch Hutchinson in the car he drove to win that event with Belimba New South Wales driver Heaton, Jack Day (# 59 Yamaha – Cazberg Earthworks) the reigning Victorian Club Champion and Aaron Stubbs from Victoria’s Mallee region. Day and Heaton had a great battle, passing and repassing each other. Justin Paull failed to finish with a blown fuse causing the fans to stop from controlling the engine temperature.

Tania Hallett (# 15 Honda – Flash Heating & Cooling) in the last two Victorian race meetings had finished second and third in the finals for the Legend’s Trophy and the Keith Astrella Memorial. She carried confidence into the Title leading from start to finish in her first heat race winning from the second New South Wales contender at the Victorian Title, Nathan O’Brien. O’Brien moved into second from lap four with Louis Rodriguez who owns the naming rights business 1Stop Property Services. Mike Griffiths (# 75 Suzuki – Simpson Racewear) a twenty-two-year veteran of Compact Speedcars returned as a late nomination to finish in fourth ahead of Mark Hutchinson whose race car had some issues believed to be wiring that Hutchinson just could not pinpoint on race night.

Into round two and Day picked up a win. Hallett led nine of the ten laps before she spun down in between turns three and four causing a caution and a restart green, white and chequered scenario. Hallett was the fastest in the race with lap times just below the eighteen second barrier as day won by .947 of a second holding off Booker after the caution with Hallett third and Griffiths in fourth.

With the fastest ten lap time of the night, Heaton (# 1 Kawasaki – Jam Signs) scorched around Rosedale in 2 minutes 59.812 to win from Paull, O’Brien, Mark Hutchinson and Stubbs (# 46 – Yamaha – Cohuna Car Spa). An individual lap of 17.544 proved to be the fastest of the night also as Heaton delivered an ominous warning to the field that he was on song. Rodriguez failed to finish after throttle cable failure.

Backing up in round three from out of grid position five, Heaton passed by Butch Hutchinson (# 2 Suzuki – Kay Mainline), Stubbs, Day and Hallett to lead on lap one in his final heat race. Hallett also had a good start moving into second with Day and Hutchinson following into line whilst Booker with some wiring coming loose concerning him as to the information he could see from his gauges, slowed and moved out of the way of the field. Heaton won from Hallett, Day, Butch Hutchinson and Stubbs.

Needing victory in the last heat of the night to elevate himself up the starting order Rodriguez made no mistake in converting his pole position start. A depleted field with Mark Hutchinson (# 6 Yamaha – Associated Power Coating) unable to sort out his mechanical concerns and Griffiths having his own issues meant that Rodriguez had to defeat Paull and O’Brien to secure the maximum points on offer. Paull only moved to second on lap nine when he passed O’Brien. The win shaped the Victorian Title field with Heaton in pole position from Hallett, Booker, Day, O’Brien (# 21 Suzuki – Racetune Moto), Rodriquez, Paull, Stubbs and Butch Hutchinson.

Prior to the feature event Tania Hallett was awarded the Petronas supported Best Presented award pack as chosen by the Rosedale Speedway’s own announce team.

Following the 1Stop Property Services pace vehicle the field was eager for the green flag and when it came time to let the drivers loose in the Victorian Title, Heaton moved out to the front through turns one and two with Hallett, Booker, O’Brien and Day the early top five.

A competitive stoush between Day and O’Brien seen the two swap places whilst Paull and Rodriguez remained deep in the field in seventh and eighth on lap five. Almost a quarter distance of the way through the field Paull (# 12 Suzuki – Ringwood Mazda) moved into fifth before O’Brien passed him for that spot-on lap eight.

A three-way battle between Paull, Rodriguez and O’Brien continued before a turn three rollover when Butch Hutchinson rode a wheel and went over a couple of times. Both O’Brien with no brakes and Hutchinson with damaged from the rollover exited the race on lap fourteen. Rodriguez (# 11 Yamaha – 1Stop Property Services) moved into fourth place getting the better of Paull.

At lap sixteen Heaton had not been passed and had skipped out to a sizeable lead on the initial start and then again on the restart after the Hutchinson rollover leading from Hallett, Rodriguez who passed Booker, Paull, Day and Stubbs.

Paull overtook Booker as the next major move of the race and into third place before a lap twenty-one pass by Rodriguez over Hallett moved him to second. Shortly after Paull moved in front of his sister Tania Hallett to take third spot from her as Booker came to a stop and out of the race leaving the field to enter a green, white and chequered feature race finish.

Heaton held on deservingly having not been passed in the Victorian Title to win from Rodriguez, Paull, Hallett, Day and Stubbs.

After the race media spoke to Heaton upon his victory. “I would like to thank the Victorian Club for being terrific hosts, the NSW Club for supporting myself and Nathan to come down here to compete and my wife and major sponsor Joanne from Jam Signs and my family. Thank you to Rosedale Speedway Club for the hard work they put into the track also, we appreciate all your work. Its feel’s terrific to have the NSW, the Australian and now the Victorian Championships to our name. I was determined to win the Victorian Title after dropping away from contention due to mechanical issues last time. Well done to Louis, Justin, Tania and Jack on their podium positions today also.” Shared Heaton.