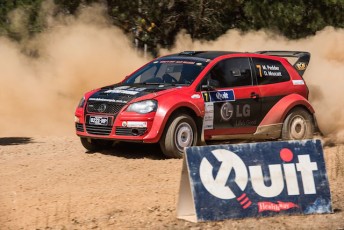 The QUIT Forest Rally which is Round 1 of the 2015 Australian Rally Championship. pic: Vettas Media

MEDIA RELEASE: The West Australian Car Club is proud to announce that Healthway has retained the naming rights sponsorship for the 2016 Forest Rally which promotes the Quit message.

“The support of Healthway has allowed us to showcase the very best of what Western Australia has to offer and they have been an integral part of the success of this event and the growth of the sport of rallying in this state,” Tapper said.

“We look forward to continuing this strong partnership and to further secure its status as one of the premier events on the Australian Rally Championship calendar.”

Healthway provides sponsorship to sports, arts and community organisations to encourage participation in healthy activities, to promote health messages and to create healthy environments such as smoke free areas.

“As well as the promotion of the Quit message, this event has created smoke free environments – the Busselton Super Stage has been a smoke free venue since it was introduced and other spectator areas are also promoted as smoke free.”

“With the event offering free entry to the public and plenty of action, it attracts many people from all over the State ensuring that the Quit message reaches a wide audience.

“Smoking remains the biggest single cause of preventable death and disease in our community and Healthway’s aim in supporting the Quit Forest Rally is to continue to encourage smokers to quit,” Ms De Lacey said.

Tapper said: “We are looking forward to the changes made to the ARC with the 4wd’s returning to Outright contention.

This will give us a great mix of cars, both 4wd and 2wd, and we have already had a number of enquires about entering. Entries will open in early February.”

Quit Forest Rally will be held in Busselton and Nannup from the 22nd – 24th of April 2016.